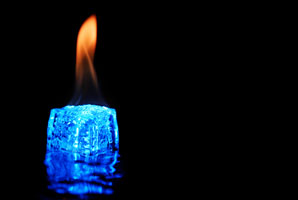 Korean scientists have worked out how ‘burning ice’ is formed in clay-rich ocean sediments, which could lead to an abundant new source of energy, according to a study in Environmental Science & Technology.

Gas hydrates, also known as ‘flammable ice’, are ice-like crystalline structures composed of gas molecules encapsulated by hydrogen-bonded water molecules. Their formation was believed to be limited in clay sedimentary deposits, but the discovery of large amounts of natural gas hydrates in oceanic clay-rich sedimentary deposits has raised the question of how they formed.

Now, researchers from the Korea Advanced Institute of Science and Technology in South Korea have replicated the conditions that lead to their formation and found that the application of an electric field led to the partial breakage of the hydrogen-bonded water clusters promoting gas hydrate nucleation.

The work could lead to a method for producing methane gas from gas hydrate deposits.