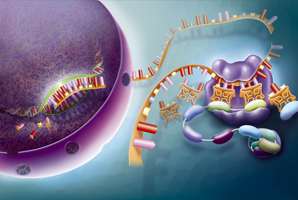 Slow and accurate protein production could be the key to a long life.

That’s according to a University of Adelaide–led study, which showed that a regulatory factor called eEF2K that retards the speed of protein production also helps ensure that error-free proteins get made so organisms can live longer.

The researchers showed that eEF2K helps with various aspects of quality control during protein synthesis. These include ensuring that only correct building blocks are incorporated into growing proteins and the correct recognition of start sites along RNA transcripts.

They further demonstrated that eEF2K-activating drugs enhanced the fidelity of protein synthesis in mouse cells, whereas worms genetically engineered to lack eEF2K had shorter lifespans.

The findings suggest that modulating the pace of protein synthesis could help protect against the molecular ravages of ageing.