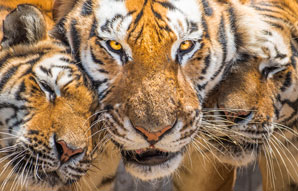 Genome sequencing has put an end to arguments over tiger diversity.

Tigers are an emblem for endangered animals, with fewer than 4,000 individuals roaming in the wild. Their territory has shrunk to 7% of their former range, yet conservation efforts are hindered by debates about how many tiger subspecies exist.

A team led by researchers from Peking University has sequenced the genomes of 32 tigers from the main roaming regions. Their results confirmed that six distinct subspecies survive today, despite sharing a common ancestor from just 110,000 years ago. The low gene flow between tiger populations suggests they evolved within unique environments. The Sumatran tiger, for example, is slighter than its continental cousins as it adapted to hunting on a small island, thanks to positive selection of a gene that drives body size.

Preserving this diversity between tiger populations could help conservationists protect them from extinction.