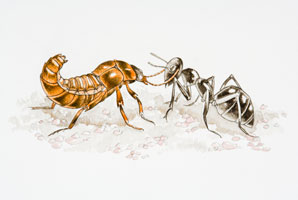 Beetles that impersonate army ants to infiltrate and scrounge off their colonies evolved at least 12 times.

A researcher from Kyushu University and his colleague gathered rove beetles from around the world that had inveigled themselves into army ant colonies and analysed their DNA to reconstruct their evolutionary history. They identified a dozen species from the rove beetle subfamily aleocharinae that had individually evolved the same bodies and behavioural antics to mimic and mislead the notoriously aggressive ants.

The authors suggest that these aleocharinae’s common ancestor, who lived about 105 million years ago, was pre-disposed to ant-like adaptations because of its short wing casings and flexible abdomen.

Species diverging on the evolutionary tree adapt to new surroundings in a generally unpredictable way. This study reveals a rare example of multiple matching traits evolving on separate lineages and with predictability driven by the necessity to survive among army ants.