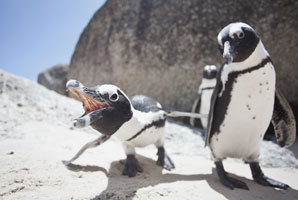 Juvenile penguins travelling to traditional sardine foraging grounds along the Namibian coastline are being thwarted by climate change and overfishing.

An international group of researchers — including two from the University of Cape Town — used satellites to track the movements of 54 young African penguins (Spheniscus demersus) from eight breeding sites, to see where they travelled to seek food.

They found that the penguins relied on water temperature and chlorophyll level cues that would normally lead them to rich sources of sardines, but these habitats have now become degraded by overfishing and climate change.

Many of the young penguins starved, and modelling suggests that breeding numbers could be halved in areas where these ecological traps occur. The authors proposed that fishing should be suspended when sardine populations fall below a certain level.