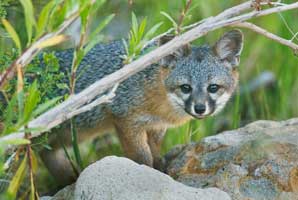 Housecat-sized Channel Island foxes are surprisingly healthy, given they have the lowest genetic variation in the animal kingdom, according to a study published in Current Biology.

The Channel Islands, off the coast of California are home to a ‘dwarf’ fox believed to have descended from the mainland grey fox. Having persisted for thousands of years at very small population sizes, they are a popular model for examining, in a natural environment, the effects of ‘deleterious mutations’ - genetic changes that increase susceptibility to diseases.

A team, including a researcher from Sichuan University, sequenced the complete set of DNA in foxes from six of the islands, including two foxes from San Nicolas and a mainland grey fox. Genomic variation is thought to be key to a species’ ability to withstand threats, yet the team found these foxes to be quite healthy - despite high levels of deleterious mutations and very low genetic variation. The San Nicolas Island foxes had effectively no genetic variation.