Extracellular Vesicles Provide a Means for Tissue Crosstalk during Exercise 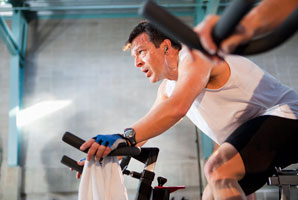 Tiny molecular packages known as vesicles circulate in the bloodstream during exercise to dispatch protein messages between muscles and the liver — a feat of biochemical communication that helps explain how the body coordinates energetic demands while working out.

An Australian-led team, which included scientists from the University of New South Wales, drew blood samples from 11 healthy men before and after they cycled on stationary bicycles for an hour at an increasingly strenuous pace. The researchers found that exercise boosted levels of more than 300 different proteins contained within vesicles. These proteins then largely disappeared from circulation after several hours of rest.

Mouse experiments then showed that these exercise-induced vesicles emanate from the muscles and head to the liver, the site of energy production where they relay the signal that the muscles need more fuel.

The research was published in the journal Cell Metabolism.