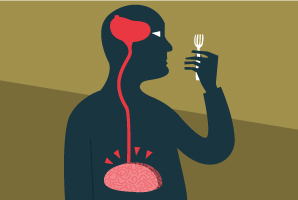 Brown fat does more than just turn food into body heat. According to a study led by scientists at the Technical University of Munich, this ‘good’ fat also interacts with a gut hormone to tell the brain when to stop eating.

The study revealed a previously unknown connection between the gut, the brain and brown fat tissue — a finding that could lead to new treatments for obesity and diabetes.

The researchers injected hungry mice with secretin, a hormone normally released during meals to stimulate the secretion of digestive enzymes. The hormone both suppressed the animals’ appetites and increased their heat production — but only when brown tissue was active, highlighting the importance of the fat in causing the feeling of satiety.