Rewiring of the Fruit Metabolome in Tomato Breeding 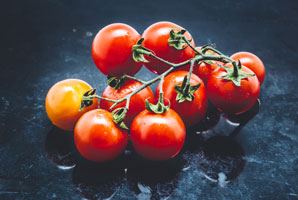 A detailed analysis of the chemicals found in tomatoes could help breeders develop tastier crops.

An international team co-led by researchers from the Chinese Academy of Agricultural Sciences scrutinized the metabolic constitution and genetic background of more than 600 different types of tomatoes including old, modern and wild varieties.

They found that, in the course of tomato domestication and modern breeding programmes, as agronomists focussed on larger fruit size, the natural production of bitter-tasting compounds and other molecules impacting flavour and nutrition was altered as well, compromising some of the richer and sweeter tang associated with heirloom tomatoes today.

These changes arose as a consequence of linkage between genes affecting fruit size and chemical composition — suggesting that, with precision gene-editing, scientists may now be able to decouple these traits and engineer tomatoes that possess any number of desired characteristics related to size, taste and myriad other qualities.