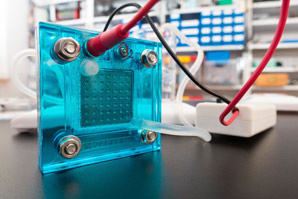 The active nitrogen atoms in a carbon catalyst for polymer electrolyte fuel cells have been identified.

The high efficiency and flexibility of polymer electrolyte fuel cells make them attractive power sources for vehicles, but they usually use catalysts containing platinum. Catalysts made from carbon doped with nitrogen are promising as cheaper alternatives. But there has been considerable debate about the role the nitrogen atoms play.

Now, five researchers, all at the University of Tsukuba in Japan, have investigated the role nitrogen with the so-called pyridinic bonding configuration plays in catalysing the oxygen reduction reaction. They did this by using seven molecules containing pyridinic nitrogen.

They found that a molecule with two pyridinic nitrogen atoms its armchair edges exhibited the highest activity. This knowledge sheds light on the catalyst mechanism and will be helpful for optimizing catalysts.