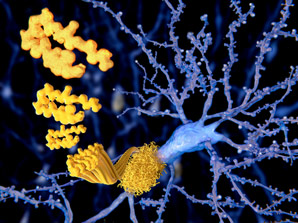 A new strategy has been developed for labelling polypeptides, which play important roles in biological processes and diseases.

Polypeptides generated by a process known as proteolytic processing regulate a diverse range of biological processes by acting as neurotransmitters and hormones. Some are also active in diseases. For example, the amyloid precursor protein plays a key role in Alzheimer’s disease. But often their small size and intricate site-specific processing makes it challenging to label them with genetic tags so that they can be imaged.

Now, a team led by researchers at the Vidyasirimedhi Institute of Science and Technology in Thailand has demonstrated a new labelling strategy that allows proteolytic proteoforms to be visualized. Their approach involves the site-specific placement of a probe using genetic code expansion. Proteolytic processing then turns on fluorescence.

The team demonstrated this labelling strategy by using it to detect amyloid-beta peptides. The researchers are confident that it could be applied to neuropeptides and cytokines that cannot be imaged using conventional techniques.