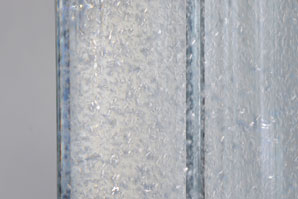 A three-dimensional nanoporous material that combines pristine graphene with heavily doped graphene shows great promise as a metal-free catalyst for hydrogen production, researchers at the Advanced Institute for Materials Research (AIMR) at Tohoku University have shown.

An environmentally friendly fuel that does not emit carbon dioxide, hydrogen can be made cleanly by using renewably generated electricity to split water molecules into hydrogen and oxygen gases. But high-performance, water-splitting electrocatalysts have generally been based on expensive metals such as platinum.

Carbon nanomaterials such as graphene are promising metal-free electrocatalysts, but they have suffered from a fundamental compromise — adding ‘dopant’ atoms such as nitrogen and sulfur boosts their catalytic activity, but lowers their electrical conductivity. This limits gains in hydrogen production.

An AIMR-led team has now discovered a way around this compromise. It involves growing islands of heavily doped graphene on a pristine graphene surface, thereby combining high catalytic activity and high electrical conductivity in the same material. The material is one of the best metal-free, hydrogen-production electrocatalysts developed so far.