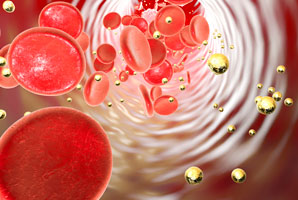 A new multicoloured molecular probe can simultaneously monitor pairs of cancer biomarkers in single cells, allowing researchers to investigate how they interact and connect.

Gold nanoparticles coated with a shell of polydopamine are at the heart of the probes, developed by a team at the East China University of Science and Technology. Different-coloured fluorescent markers coupled with molecular sensors for specific cancer biomarkers are attached to the dopamine anchors. The dopamine-coated gold inhibits the markers’ fluorescence until the sensor is near the target biomarker. At that point, the sensor attaches to the biomarker and separates from the dopamine-coated gold nanoparticle, freeing it to fluoresce.