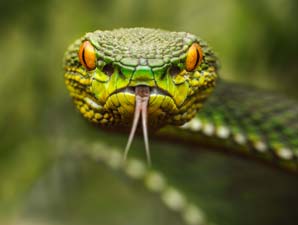 Fluorescent cells can inject some speed into the analysis of venom for leads for potential drugs, a team, including Shanghai Tech University researchers, reports.

Unlikely as it sounds, venoms are a proven source of medicines. Venom compounds have evolved over millennia to selectively bind to their target, often hitting essential cellular pores called ion channels. Sometimes, these channels have medical relevance — such as the Kv1.3 ion channel, which in humans is found in the T cells that go awry in autoimmune diseases like psoriasis and rheumatoid arthritis.

Finding a venom peptide to hit a given target is laborious, so the authors engineered Kv1.3-carrying cells to speed up the process. In these cells, a venom peptide and the ion channel each get tagged with a chemical tail. Should the peptide bind to the ion channel, their tails interact to release a chemical that turns the cell fluorescent, rapidly signalling a hit. The technique should improve the researcher’s strike rate and improve the flow of new venom-derived drugs into hospitals.