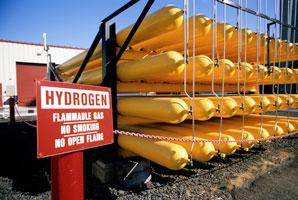 Extracting hydrogen from water could become cheaper and more efficient thanks to a new electrocatalyst.

Hydrogen is very energy dense and can be produced from water, making it attractive as a clean, renewable fuel. However, a large electrical current or an electrocatalyst is required to speed along the chemical reaction. These are typically made from rare and expensive metals, such as platinum.

Researchers from Zhejiang University were part of a team that built a new catalyst by growing tiny flakes of molybdenum diselenide (MoSe2), a semiconducting inorganic compound, on graphene, a layer of carbon one atom thick. They soaked the nanoflakes in hot ammonia to infuse them with nitrogen, which introduced extra electrons and increased the material’s conductivity.

The new nanoflakes generated hydrogen from water using a relatively low voltage and sustained their catalytic performance for more than 32 hours.