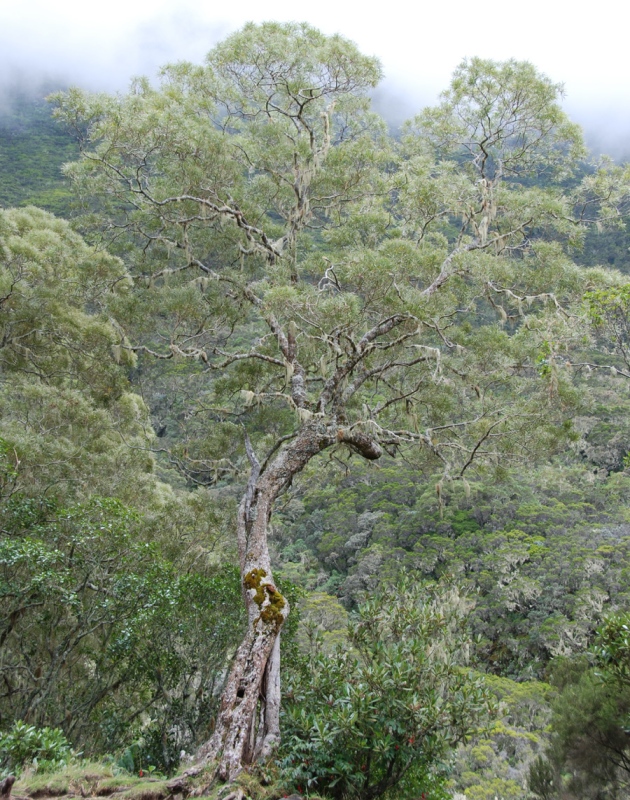 Ecologists have now shown that these acacia trees on Réunion are the same species as those on Hawaii.

In what is probably the farthest single dispersal event ever recorded, researchers have shown using genetic analysis that an acacia tree endemic to Réunion Island in the Indian Ocean is directly descended from a common Hawaiian tree known as the koa. In fact, these two trees on small specks of land on opposite sides of the globe turn out to be the same species.

The event is remarkable not just for the sheer distance covered — some 18,000 kilometres, almost the farthest apart that any two points on land can be — but that it occurred between two small islands. Koa seeds are unlikely to have floated to Réunion — they will not germinate after being soaked in seawater, and the trees grow in the mountains, not near the shore. The researchers, led by Johannes Le Roux, a molecular ecologist at Stellenbosch University in Matieland, South Africa, propose in a study published this week that a sea bird brought a seed from Hawaii to Réunion in its stomach or stuck to its feet in a one-off event some 1.4 million years ago (J. J. Le Roux et al. New Phytol. http://dx.doi.org/10.1111/nph.12900; 2014).

Le Roux notes that the physical similarities between the two trees, Acacia heterophylla from Réunion and Acacia koa from Hawaii, have been known for decades. “To me the most exciting thing is that we have solved this riddle,” he says. “And how improbable is it?”

Le Roux and his team sequenced the DNA from 88 trees, including A. heterophylla, A. koa and a closely related acacia species from Australia, where the family originated. They found that all the acacias on Réunion share a genetic signature that is just one mutational step away from that of some Hawaiian koas. Using the slight differences between the trees’ sequences, they developed a family tree, which clearly showed that all A. heterophylla are more closely related to one type of Hawaiian koa than some other types of koa are to each other.

To work out when the dispersal event took place, the team used a ‘molecular clock’. This counts up genetic changes between populations and uses an estimated mutation rate to derive the date that populations first split. The team knew that the koa tree originally came from Australia, and that the earliest point at which it could have become established on Hawaii was when Kauai, one of the older Hawaiian islands with the high elevations that koas prefer, formed 5.1 million years ago. Comparison of the Hawaiian koa and the trees on Réunion then showed that mutations that occurred in the subsequent 3.7 million years were present in both lineages. But mutations that occurred after that were found in either the Réunion trees or the Hawaiian trees, but not in both; this genetic divergence suggests that the dispersal event took place 1.4 million years ago. 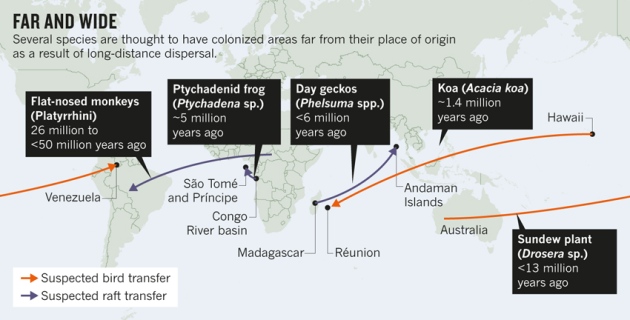 Le Roux has ruled out the possibility of humans transferring the seed, because the molecular clock suggests that genetic changes began long before humans arrived in Réunion. “Despite its close genetic relatedness to koas from Hawaii, you see there is already diversification that is unique to Réunion,” he says.

The startling finding is the latest in a string of improbable long-distance dispersal events that have been uncovered in the past 15 years or so. These include the proposed movement of New World (flat-nosed) monkeys on a raft from Africa to South America less than 50 million years ago, long after the two continents split; and the transfer of sundew carnivorous plants (Drosera species) from western Australia to Venezuela, probably by birds (see ‘Far and wide’). Such findings have shaken up the field of biogeography, which concerns itself with why species are found where they are.

In the past, similar species found on different land masses were presumed to be the result of the continents slowly drifting apart, says Alan de Queiroz, an evolutionary biologist at the University of Nevada, Reno, and author of The Monkey’s Voyage (Basic, 2014), a book about long-distance dispersal. And islands were thought to be largely dead ends when it came to species dispersal. “Things don’t go from islands,” he says, “or at least that was the general thought.”

But the newly discovered long-distance events are changing that opinion, and bio­geographers are increasingly stressing the role of improbable events and serendipity in shaping which species occur where. “The event [of the koa dispersal] is a giant fluke, but that’s part of the message of a lot of recent biogeographic studies: that giant flukes happen,” de Queiroz says.

As these accounts of long-distance dispersal accumulate, some ecologists say that the next challenge is to make predictive generalizations about how often such events occur and which mechanisms (such as bird dispersal or rafting) are most important. “What we need to do is go beyond this accumulation of anecdotal evidence,” says Ran Nathan, a movement ecologist at the Hebrew University of Jerusalem.

But the problem is that the rarity and accidental nature of such events may defy categorization. “There could be an argument that you get an endless list of very, very strange and peculiar mechanisms,” says Nathan. “There will be a long list, but there will be some mechanisms that are much more frequent.”

Ecologist Jon Waters of the University of Otago in Dunedin, New Zealand, says that despite the potentially large role of long-distance dispersals in organizing global flora and fauna, such dispersals are not completely random or unpredictable. “As well as thinking about geographic proximity in making predictions about dispersal, there are numerous other factors to consider, such as oceanographic connectivity patterns, prevailing winds, storm tracks and even bird migrations,” he says.

In other words, the distribution of some species may be the result of chance, time and luck — but there are still patterns. And science still has a part to play in elucidating them.