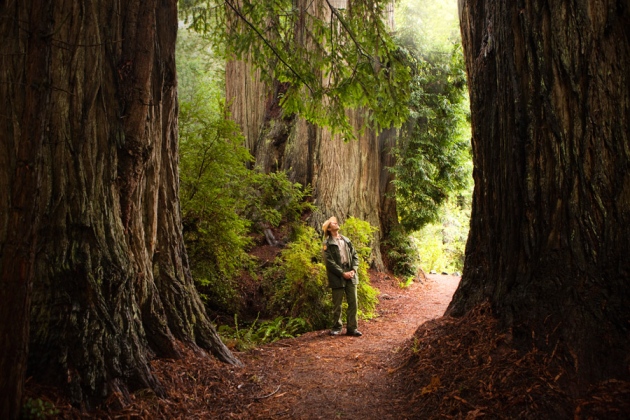 Trees — including California's giant redwoods — add an increasing amount of mass every year.

Many foresters have long assumed that trees gradually lose their vigour as they mature, but a new analysis suggests that the larger a tree gets, the more kilos of carbon it puts on each year.

“The trees that are adding the most mass are the biggest ones, and that holds pretty much everywhere on Earth that we looked,” says Nathan Stephenson, an ecologist at the US Geological Survey in Three Rivers, California, and the first author of the study, which appears today in Nature1. “Trees have the equivalent of an adolescent growth spurt, but it just keeps going.”

The scientific literature is chock-full of studies that focus on forests' initial growth and their gradual move towards a plateau in the amount of carbon they store as they reach maturity2. Researchers have also documented a reduction in growth at the level of individual leaves in older trees3.

In their study, Stephenson and his colleagues analysed reams of data on 673,046 trees from 403 species in monitored forest plots, in both tropical and temperate areas around the world. They found that the largest trees gained the most mass each year in 97% of the species, capitalizing on their additional leaves and adding ever more girth high in the sky.

Although they relied mostly on existing data, the team calculated growth rates at the level of the individual trees, whereas earlier studies had typically looked at the overall carbon stored in a plot.

Estimating absolute growth for any tree remains problematic, in part because researchers typically take measurements at a person's height and have to extrapolate the growth rate higher up. But the researchers' calculations consistently showed that larger trees added the most mass. In one old-growth forest plot in the western United States, for instance, trees larger than 100 centimetres in diameter comprised just 6% of trees, but accounted for 33% of the growth.

The findings build on a detailed case study published in 2010, which showed similar growth trends for two of the world’s tallest trees — the coast redwood (Sequoia sempervirens) and the eucalyptus (Eucalyptus regnans)4, both of which can grow well past 100 metres in height. In that study, researchers climbed, and took detailed measurements of, branches and limbs throughout the canopy to calculate overall tree growth. Stephen Sillett, a botanist at Humboldt State University in Arcata, California, who led the 2010 study, says that the latest analysis confirms that his group’s basic findings apply to almost all trees.

Noah Baker spoke about the findings with Nathan Stephenson, an ecologist at the US Geological Survey.

The results are consistent with the known reduction in growth at the leaf level as trees age. Although individual leaves may be less efficient, older trees have more of them. And in older forests, fewer large trees dominate growth trends until they are eventually brought down by a combination of fungi, fires, wind and gravity; the rate of carbon accumulation depends on how fast old forests turn over.

“It’s the geometric reality of tree growth: bigger trees have more leaves, and they have more surface across which wood is deposited,” Sillett says. “The idea that older forests are decadent — it’s really just a myth.”

The findings help to resolve some of these contradictions, says Maurizio Mencuccini, a forest ecologist at the University of Edinburgh, UK. The younger trees may grow faster on a relative scale, he says, meaning that they take less time to, say, double in size. ”But on an absolute scale, the old trees keep growing far more.”

The study has broad implications for forest management, whether in maximizing the yield of timber harvests or providing old-growth habitat and increasing carbon stocks. More broadly, the research could help scientists to develop better models of how forests function and their role in regulating the climate.