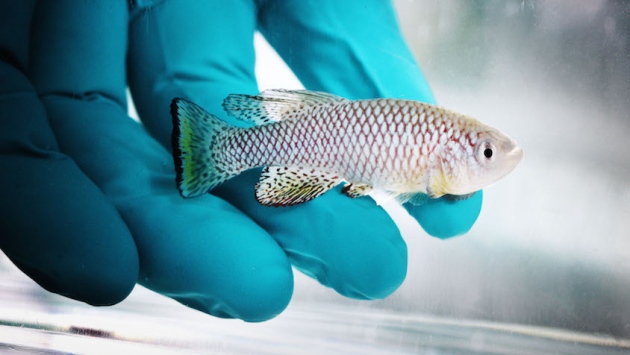 Nothobranchius furzeri inhabits rain ponds in Mozambique and Zimbabwe, and is the shortest-lived vertebrate that can be raised in captivity.

For the turquoise killifish, ‘live fast, die young’ is no cliché. The little African freshwater fish reach sexual maturity 3 weeks after hatching and die of old age a few months later. A pair of studies now hints at the genetic basis for this abbreviated existence, providing precious information for a small but growing cadre of labs that hope the species will help to unlock the secrets of human ageing.

Turquoise killifish (Nothobranchius furzeri) eke out an improbable existence. They inhabit transient ponds that fill up during the rainy season in Mozambique and Zimbabwe, but dry out for the rest of the year. During the brief wet period, the fish rapidly develop, mate and lay eggs that go into suspended animation during the dry season, to hatch when the rains return the following year.

A favourite of fish hobbyists since the 1970s, killifish are gaining popularity among scientists who study ageing, and dozens of labs now house them. Elderly killifish — a couple of months old — show hallmarks of ageing. Their bright scales fade and their cognition wavers; many develop tumours. Lifespan-altering experiments that take years in mice and decades in primates can be over in months in killifish, which are also more closely related to humans than are fruit flies, nematodes and other short-lived lab organisms popular in ageing research.

“It turns out to be the shortest-lived vertebrate that can be raised in captivity,” says Dario Valenzano, a geneticist at the Max Planck Institute for Biology of Ageing in Cologne, Germany, and a member of one of two teams that have sequenced the turquoise killifish genome. Papers from both teams appear in Cell on 3 December1, 2.

The turquoise killifish genome contains several clues to its peculiar, fleeting life. Valenzano and his colleagues found that variations in genes involved in nutrient sensing, DNA repair and ageing have been selected for during its evolutionary history. Such genes might prove instructive for ageing in longer-lived animals. One such is IGF1R, which has been linked to extreme longevity in bowhead whales, naked mole-rats and Brandt's bat. Genes linked to IGF1R vary between an extremely short-lived killifish lab strain and a wild variety that can live for twice as long. A similar difference between short-lived and longer-lived strains was also seen in a gene that has been linked to dementia in humans.

“Maybe these genes are central hubs for regulating survival,” says Valenzano. “In some species they can accelerate ageing, and in some they can slow it down.”

The ability to enter suspended animation (known as diapause) may also be linked to lifespan; genes involved in a similar stasis in roundworms also influence ageing. In the other study, a team led by Christoph Englert and Matthias Platzer at the Leibniz Institute on Ageing-Fritz Lipmann Institute in Jena, Germany, found substantial overlap in the expression patterns of genes in the killifish embryos in diapause and those in the brains of aged killifish.

Genetic-engineering experiments — such as creating knock-out fish that lack particular genes — are needed to confirm whether the genes pinpointed in these studies truly influence ageing. These tests are already under way, says Anne Brunet, a geneticist at Stanford University in California and an author on one of the studies. Earlier this year Brunet’s team used CRISPR-Cas9 genome editing in 'proof-of-principle' experiments to alter several ageing-related genes in killifish3. “We are excited at trying to make it live longer,” she says. Her team is also screening drugs in killifish to see if any lengthen its lifespan or slow tissue degeneration.

Killifish hold much promise for ageing research, says Matt Kaeberlein, a biochemist at the University of Washington in Seattle, but they have not yet yielded the insights that have come out of simpler organisms. Scientists have a long list of genes that extend or shorten lifespan in nematodes, fruit flies and yeast, he notes, but it remains to be seen whether genes such as IGF1R play such pivotal roles in killifish. “It’s a little bit early to know for sure whether the killifish is going to emerge as the next greatest model of ageing.”