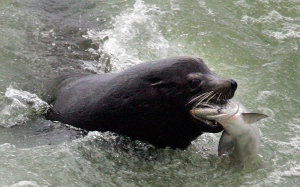 Sea lions are devouring threatened salmon populations at the Bonneville Dam in the Columbia river.

What do you do when a charismatic marine mammal is wreaking havoc by gorging on a threatened species that humans also find delicious? That’s the awkward problem faced by wildlife managers along the Columbia River in Washington and Oregon states, where sea lions have been congregating for the past decade to feast on salmon waiting to climb the fish ladders at the base of the Bonneville Dam on their spring voyage upriver to spawn.

To protect the Chinook salmon (Oncorhynchus tshawytscha) and steelhead (Oncorhynchus mykiss) in the river, some of which are listed as threatened populations, in 2008 the states of Washington and Oregon obtained permission from the National Oceanic and Atmospheric Administration in Silver Spring, Maryland, to kill California sea lions (which are normally protected) seen feeding repeatedly at the dam, after attempts to frighten the animals away proved ineffective.

In response, the Humane Society of the United States, based in Washington DC, and others filed a lawsuit to stop the practice and their legal challenges have continued. A US district court in Portland, Oregon, is expected to hear full arguments for a final ruling in the next few weeks. In the meantime, more than 40 California sea lions have been killed and 11 transferred to aquaria and zoos.

Survey data collected by the US Army Corps of Engineers during the years of the cull show that numbers of California sea lions (Zalophus californianus) are decreasing at the dam, along with the amount of salmon they eat. The corps and others attribute this to the removal programme.

But the cull may have been too successful. Last year, the larger Steller sea lions (Eumetopias jubatus), which arrived in earnest at the dam in 2005 and have returned in greater numbers each year, outnumbered California sea lions for the first time and ate fully half of the predated salmon.

“Part of this switch toward the Steller sea lion abundance may be due in part to success of the removal programme,” said Doug Hatch of the Columbia River Inter-Tribal Fish Commission in Portland, Oregon, speaking at a meeting of the American Fisheries Society in St Paul, Minnesota this week.

The problem with this shift is that Steller sea lions are themselves listed as a threatened species, meaning that 'hazing' — disturbing them with, for example, rubber bullets — is the only option for dealing with them. But the eastern stock of Steller sea lions, which includes those at Bonneville, is under review for delisting as threatened, so that protection may not last.

A key issue is exactly how much the sea lions are affecting the salmon, particularly the populations that are listed as threatened. This is a difficult question to answer. Accurate numbers are available from near the dam, where sea lions and the prey in their mouths can be counted directly, but the dam is 235 kilometres from the mouth of the Columbia River and sea lions are present patchily throughout this length.

Hatch’s best estimate is that sea lions take on average a little over 10% of the listed populations annually between the dam and the ocean. He and his colleagues are tagging sea lions to improve understanding of where the mammals go within the river and beyond.

The Humane Society says that the cull focuses on the wrong problem — sea lions — instead of reducing the allowable fishing catch, improving habitat, and reducing losses from hydropower, which it maintains are greater threats to the fish.

Archaeological records suggest that sea lions are recent arrivals in the Columbia River, but researchers are finding that the smorgasbord of oily fish is expanding more than their range. “We have captured and handled the largest California sea lions anyone has ever touched,” says Robin Brown, a marine mammal specialist at Oregon Fish and Wildlife in Corvallis. The biggest weighed 658 kilograms, compared to a typical weight for a male of 200–400 kilograms. “This Columbia River salmon seems to fatten them up bigger and better than anything we’ve ever seen.”