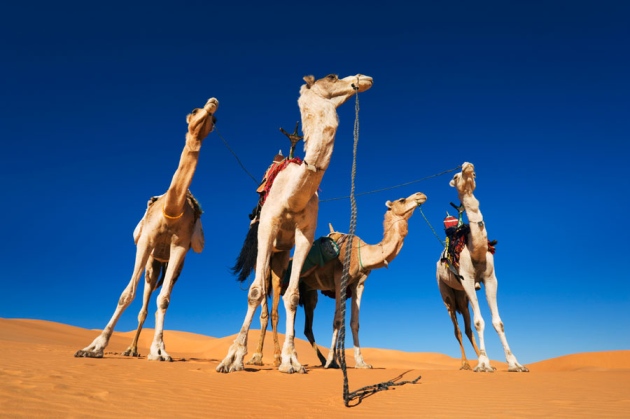 Possible infection with the MERS coronavirus, or a closely related virus, has been detected in camels.

A year on from the first reported human case of infection with Middle East respiratory syndrome coronavirus (MERS-CoV), the world still has few answers to the most pressing question from a public-health perspective: what is the source of the steady stream of new cases? Only with this information can the outbreak be controlled.

There have so far been 114 confirmed cases of MERS-CoV infection, including 54 deaths, with another 34 suspected cases (see ‘Catching on’). All originated in the Arabian Peninsula, with most in Saudi Arabia and others in Jordan, Qatar and the United Arab Emirates (UAE). Imported cases have occurred in the United Kingdom, France, Italy and Tunisia. The virus is thought to be an animal virus that sporadically jumps to people — there are no signs yet that it can spread easily between humans, although limited spread between people in close contact has been seen.

But a lack of epidemiological studies means that the source of the virus is still unknown. This is “absolutely unacceptable”, says Michael Osterholm, head of the University of Minnesota’s Center for Infectious Disease Research and Policy in Minneapolis. Affected countries have to some extent lacked a sense of urgency, agrees Jean-Claude Manuguerra, head of the Laboratory for Urgent Response to Biological Threats at the Pasteur Institute in Paris. They have also tended to consider it a sovereign issue that is the business of national authorities, not outsiders, he adds. 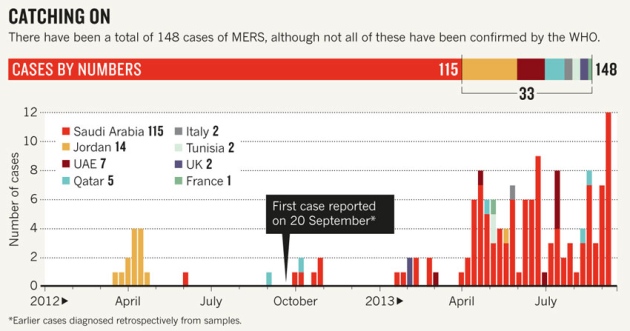 Manuguerra was one of 13 international health experts invited by the Saudi Arabian government and the World Health Organization (WHO) in Geneva, Switzerland, to visit the country in June as part of a joint mission to assess the situation and recommend measures to control the outbreak. He contrasts the lack of progress on MERS epidemiology with China’s rapid and robust response following the report in March of the first human cases of a new H7N9 avian influenza virus (see Nature 496, 397; 2013), which quickly identified live-bird markets as the main route of human infections and moved swiftly to shut them down.

To identify a source of infection, patients must be questioned in detail about their recent activities, such as whether they visited animal markets or farms, or ate certain foods, to find patterns and leads for investigation. But the joint Saudi–WHO mission concluded that such work has not been detailed enough to accomplish this.

Also insufficient, the mission said, were efforts to look for the virus in animal populations, which would enable transmission routes to humans to be shut down. Bats are likely to have been the original source: the genome sequence of the MERS virus is closest to that of other bat corona­viruses. Since this discovery, Saudi Arabia has twice invited a team led by Ian Lipkin, a virologist at Columbia University in New York, to sample bat tissue and faeces, and in August the team published a partial sequence that seems to match that of MERS1 (see Nature http://doi.org/ntk; 2013).

But direct contact with bats is unlikely to explain the human cases, and scientists suspect that the virus has infected other animals that are more likely to come into contact with people. Some say they are baffled that affected countries have not carried out large-scale sampling of animals to look for the virus. Ziad Memish, Saudi Arabia’s deputy minister of health, says that his country has been waiting for advice about testing from the Rome-based United Nations Food and Agriculture Organization (FAO) and the World Organisation for Animal Health in Paris.

Juan Lubroth, the FAO’s chief veterinary officer, says that its first expert mission to assess possible animal sources left last weekend for Saudi Arabia and the UAE. There will be several more, he adds, and the FAO hopes to work with national authorities to start epidemiological studies within months.

A tantalizing clue to a possible animal source comes from two studies on camels2, 3. Both found antibodies to MERS or a closely related virus in camels in neighbouring countries to those affected, indicating past infection. Neither found live virus in the animals, however.

“It is possible that such a virus is ubiquitous, but from time to time is undergoing crucial mutations that allow limited cross-species jumps from the intermediate host to humans,” says Malik Peiris, a virologist at the University of Hong Kong and a co-author of one of the studies. That was the scenario with the exotic coronavirus SARS that emerged in Hong Kong in late 2002 and evolved to become a virus that spread easily between humans, killing almost 800 people before dying out in July 2003.

With millions soon to be on the move for the hajj, the annual pilgrimage to Mecca in mid-October, the Saudi authorities are on high alert for suspected cases of MERS, and will no doubt be hoping that MERS is not the next SARS.