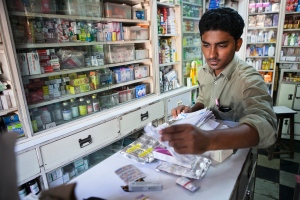 Patient groups are concerned that price-capped medicines may fall out of favour due to lack of demand if drug companies stop promoting them.

India this week announced a policy to cap the prices of essential drugs, including ones for HIV and cancer, to make medicines more affordable for the poor. But observers of the pharmaceutical industry suggest that parts of  the legislation may actually have the opposite effect — and a challenge has already been filed at the Supreme Court.

The policy is an update of a 17-year-old law that has been fought over for a decade, and a petition opposing it has been brought by the All India Drug Action Network. At stake is a 620-billion-rupee (US$11.4-billion) domestic drug market that supplies more than one billion people.

The price cap will knock at least $258 million off the value of that market, says IMS Health, a consulting firm in Mumbai, India. The biggest losses will be for drug firms GlaxoSmithKline of London, Ranbaxy of Gurgaon, India, Pfizer of New York and Abbott Laboratories of North Chicago, Illinois.

But industry has approved the policy — and patient advocates argue that holes in the law will allow nimble pharmaceutical companies to sidestep the price ceiling.

The policy is a "sham" declares Chandra Gulhati, editor of drug-reference guide the Monthly Index of Medical Specialties India.

The updated policy places a price limit on 348 medicines deemed essential in India. The government will set the ceiling as the average price of all brands that have a market share of more than 1% for each category of drug.

The previous legislation, implemented in 1995, set the price ceiling at twice the cost of manufacturing and packaging the drug, and covered only 74 compounds.

Tapan Ray, director-general of the Organization of Pharmaceutical Producers of India in Mumbai, says that although industry will face some immediate losses, the updated policy is “prudent for India in the longer term”.

Patient advocates warn that the new policy could actually increase the price of medicines favoured by the poor.

In India, drugs with the same underlying formulations are sold at a range of prices. GlaxoSmithKline, for example, sells an antibiotic combination under the brand name Augmentin for US$4.85 per 6 tablets. Competitors sell the same formulation for $1.20. The price difference matters in a country where 69% of the population earns less than $2 a day.

“The market of medicines is the most distorted market because the brand that is the market leader is the costliest brand, it is the most vigorously promoted”

Under the updated policy, Augmentin will become cheaper. But if its price comes down to only a few tens of rupees more than its lesser-known equivalent, say observers, people may opt to spend extra money for the recognizable brand. If this happens, other companies will lose the incentive to keep their prices lower than the price-ceiling.

The policy also specifies the exact dosage of the drug that will come under price control.  So pharmaceutical companies may switch their marketing practices to promote sales of alternate dosages exempt from regulation, predicts Gulhati. This practice is not unusual: Indian doctors routinely prescribe patients tablets that need to be split up to deliver the right dose.

Patient advocates are wary from past experience . Studies have shown that doctors who are given information about certain drugs by pharmaceutical representatives tend to prescribe those drugs more frequently1, so the promotion of alternate versions of a drug may mean that the price-capped drug is no longer prescribed.

"The market of medicines is the most distorted market because the brand that is the market leader is the costliest brand, it is the most vigorously promoted," says Mira Shiva, co-founder of the All India Drug Action Network.

Something similar may already have happened under the previous price-control law. A study published this year found that the most popular medicines prescribed for fungal infections in 2010 were not on the price-cap list2. And some price-controlled anti-fungal drugs had become unavailable in pharmacies as promotion of more expensive drugs led to a fall in demand for the cheaper option, says Nilay Kanti Das, a dermatologist at the Medical College in Kolkata, India, and a co-author of the paper.

For instance, since the price of an anti-fungal cream called Tolnaftate was capped in 1995, companies have stopped promoting it and the drug is rarely prescribed by doctors.

In fact, only 6.5% of doctors polled even knew which medicines were controlled, suggesting that the price control had become largely irrelevant, said the study.

“Is the new policy meant to control prices at all? This is all to mislead the people of India,” says Gulhati.