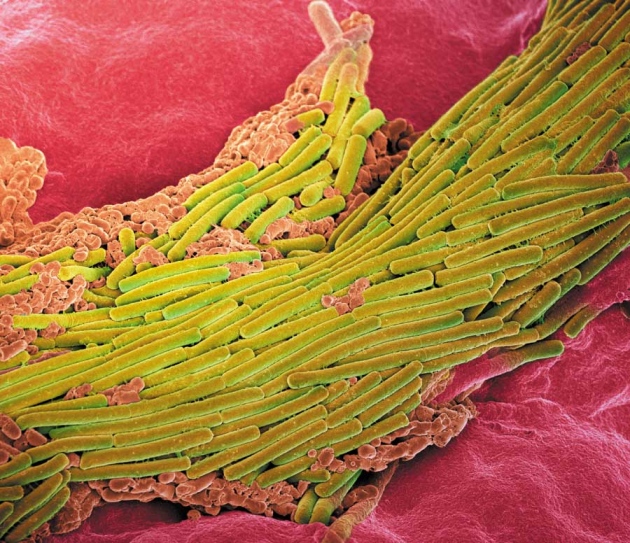 Clostridium difficile (yellow cells) causes an intestinal infection that can be treated with processed stool.

It is just over a year since the publication of the first randomized controlled trial1 investigating the medical use of human faeces. The 43 trial participants had recurrent Clostridium difficile infections, which cause dangerous, painful and persistent diarrhoea. Those in the control groups received antibiotics alone. Those in the test group received antibiotics along with a fluid derived from filtered faeces, which was delivered into the upper small intestine through nasal tubes.

This small trial was stopped ahead of schedule because the faecal slurry was more than twice as effective in resolving symptoms as antibiotics alone1. Non-randomized studies, with outcomes collected from hundreds of people suffering from recurrent C. difficile infections and treated with similar procedures, have had typical success rates of around 90% (ref. 2).

First described3 in the scientific literature in 1958, faecal microbiota transplantation (FMT), delivers processed stool from a healthy individual to the gut of a sick person through enema, colonoscopy or other means. The goal is to displace pathogenic microbes from the intestine by re-establishing a healthy microbial community. Interest has surged in the past five years (see 'Stool treatment'). At the same time, new regulatory barriers have made FMT more difficult to study or practice.

In May 2013, the US Food and Drug Administration (FDA) issued a public announcement that it had been regulating human faeces as a drug. This classification requires physicians to submit a time-consuming Investigational New Drug (IND) application before performing FMT. The FDA reasoned that this requirement would make FMT safer by providing oversight, standardizing therapy and, eventually, encouraging development of commercial drug products.

At a public meeting hosted that month by the FDA and the US National Institutes of Health (NIH), patients, physicians and representatives of the Centers for Disease Control and Prevention and several professional medical societies voiced concern about restricting access to care for these increasingly prevalent infections. Six weeks later, the FDA revised its position. The agency decided, for the time being, not to enforce the IND requirement for recurrent C. difficile infections. 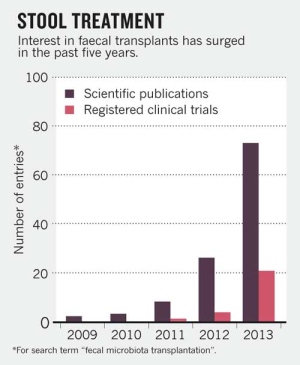 This compassionate exception is now enabling many people to receive much-needed care. But the long-term status of FMT for C. difficile infection is unresolved, and regulatory policy is complicating research into the exploration of FMT for other conditions, such as inflammatory bowel diseases or obesity.

Whether and when the therapeutic potential of FMT is realized will depend on how the FDA and other agencies regulate the use of stool. Although treating it as a drug creates strict requirements to protect patients, it limits access to care. Reclassifying stool as a tissue product or giving it its own classification, as the FDA does for blood, would keep patients safe, ensure broad access and facilitate research.

The human gut microbiome has been described as a 'virtual organ'4. Conditions ranging from inflammatory bowel diseases and obesity to asthma and cancer have been linked to its composition, with associations described between gut bacteria, biologically active metabolites and the immune system5. In addition to evidence from human studies of FMT, experimental evidence from studies in mice shows that changing this microbial ecosystem can affect hosts' physiology6.

More than a half a dozen clinical trials have been registered to study FMT in inflammatory bowel diseases. But hopes that manipulating the gut microbiome to treat diseases other than C. difficile are still speculative7, 8.

Few human studies have followed patients prospectively to assess for adverse outcomes of FMT. Transient abdominal discomfort and bloating have been observed after FMT, but little long-term safety data exist.

Furthermore, there are real (albeit unrealized) risks that transplanting faecal microbiota can spread infectious diseases such as HIV or hepatitis. In the 1970s and 1980s, before today's strict blood-donation regulations were introduced, thousands of people with haemophilia in the United States were infected with HIV from contaminated blood products. There are also theoretical hazards that FMT could change the microbiome to make people more susceptible to chronic conditions such as obesity or autoimmune disorders. (The same can be said for the use of antibiotics, which might also cause unknown, lasting perturbations to the microbiome.)

Risks of FMT can be mitigated by mandating rigorous screening. But overly restrictive rules might encourage people to seek treatment outside the medical establishment. Instructions for do-it-yourself faecal transplants are available online; individuals have posted videos on YouTube with tens of thousands of views and written books advocating at-home procedures using stool from acquaintances or family members. Some have even approached us for advice about using their pets as donors. An open letter on one FMT advocacy site urges doctors to recognize that at-home treatments are occurring, partly because physicians are not offering the procedure (see go.nature.com/zrzbuk).

The FDA defines drugs, in part, as “articles intended for use in the diagnosis, cure, mitigation, treatment, or prevention of disease”. However, stool is unlike conventional drugs, which are produced under controlled conditions with consistent, known ingredients. Stool is a variable, complex mixture of microbes, metabolites and human cells. It cannot be characterized to the rigorous standards applied to conventional drugs. The material is also widely available — it comes from healthy volunteers, rather than chemical factories or controlled cell cultures.

The FDA regulates blood, cartilage, bone, skin and egg cells as human tissues or under similar customized statutes. Transplanting these products into people requires meticulous record-keeping and screening for communicable diseases. These are exactly the safety precautions that should be taken with FMT. Under current US law, products that are excreted from the body or that depend on living cells from non-relatives are excluded from this category, disqualifying faeces. Exceptions have been made for semen, which is a tissue product, and blood, which has its own bespoke rules. In our view, statutes should be changed so that faeces too can be regulated as a tissue, not a drug. Risks can be reduced by rigorous screening, and the potential for clinical benefit is substantial.

Appropriate regulation would pave the way for carefully screened and processed material to be made available through stool banks that operate similarly to blood banks. Stringent safety requirements set by the FDA would protect against infectious diseases, and a mandatory registry would track adverse events. Centralizing the screening and processing steps would make the treatment cheaper, safer, less variable and more convenient. It would also reduce the demand for risky at-home procedures.

As a model for this approach, we (M.B.S. and E.J.A.) helped to launch a stool bank called OpenBiome in 2012, which supplies material for C. difficile treatments, under the exemption currently offered by the FDA. This non-profit organization is funded primarily by charitable donations, but in the future, this and other stool banks could be sustained through user fees from hospitals. In its first three months of operation, OpenBiome delivered more than 100 treatments for C. difficile to 12 US hospitals. At least two teaching hospitals, including Massachusetts General Hospital in Boston and Emory University Hospital in Atlanta, Georgia, have also developed stool banks for their own patients.

OpenBiome screens donors for infectious agents through 17 blood and stool assays; donors are also assessed for chronic conditions, such as metabolic syndrome, autoimmune disorders and digestive problems. Many samples, often dozens, are collected from each donor, reducing screening costs per treatment to US$250, a fraction of the cost of one-off treatments. Samples are homogenized, filtered and frozen for long-term storage, providing physicians with a standardized, convenient source of material. This model could easily be scaled to meet the clinical need for FMT, both for C. difficile and for clinical trials of other diseases.

Although some companies such Rebiotix in Roseville, Minnesota, and Monarch Laboratories in Irvine, California, are hoping to commercialize faeces-derived products as a drug, this classification threatens to restrict FMT mainly to companies with the resources to fund large clinical trials. Stool banks, which would distribute faeces as a tissue, could promote access and allow more investigation of potential clinical uses of FMT.

There are diseases in which the gut microbiome has been implicated but that do not have sufficient evidence to warrant FMT. To discourage inappropriate use, tissue banks should require documented approval from a clinic's institutional review board before releasing material for conditions other than C. difficile infection.

In the past decade, our understanding of the microbiome has moved from identifying species to associating them with diseases. The next step is to engineer this system to improve human health. FMT, as it is currently practiced, does not use specific, pure cultures of bacterial isolates; rather, it delivers uncharacterized, minimally processed faecal material into a patient. As this field progresses, we expect that the microbial 'active ingredients' will be elucidated, enabling well-characterized cultures to be used as a second generation of microbiome therapeutics9, 10.

Knowledge gleaned from transplantation of natural systems could inform the design of synthetic communities tailored to treat specific diseases. Unlike stool, these derivatives will be easy to regulate as drugs because they will be highly characterized, consistently manufactured cocktails of bacteria and will not be freely available from a friend. Companies such as Seres Health in Cambridge, Massachusetts, and Vedanta Biosciences in Boston have already started testing this synthetic approach.