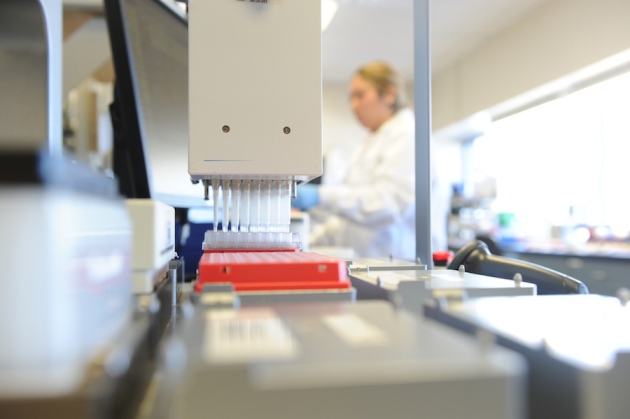 A laboratory at Gen9, a firm in Cambridge, Massachusetts, that is seeking to drive down the cost of synthesizing strings of DNA.

Proposals for a large public–private initiative to synthesize an entire human genome from scratch — an effort that could take a decade and require billions of dollars in technological development — were formally unveiled on 2 June, almost a month after they were first aired at a secretive meeting.

Proponents of the effort, named ‘Human Genome Project—Write’ (HGP-write), write in Science that US$100 million from a range of funding sources would help to get their vision off the ground1. The team is led by synthetic biologist Jef Boeke at New York University; genome scientist George Church at Harvard Medical School in Boston, Massachusetts; and Andrew Hessel, a futurist at the commercial design studio Autodesk Research in San Rafael, California.

But the idea — which essentially aims to develop technologies that reduce the cost of DNA synthesis — has not met with universal excitement among researchers.

To some, the proposal to create a human genome is praiseworthy for its ambition and sheer chutzpah: at present, only tiny bacterial genomes and a portion of a yeast genome have been made from scratch. But other researchers feel that HGP-write represents a needless centralization of work that is already taking place in companies trying to lower the price of synthesizing strings of DNA. Some of HGP-write’s proponents have financial stakes in those firms, which include Gen9 in Cambridge, Massachusetts.

“My first thought was ‘so what’,” says Martin Fussenegger, a synthetic biologist at the Swiss Federal Institute of Technology in Zurich. “I personally think this will happen naturally. It’s just a matter of price at the end.”

Others think that the project should be delayed until its leaders can win broader support for the idea. In an e-mail sent to reporters, synthetic biologist Drew Endy, at Stanford University in California, and religion scholar Laurie Zoloth, at Northwestern University in Evanston, Illinois, say that the HGP-write team has not properly justified its aims, and that the project should be abandoned. “We are still waiting for a serious public debate with participation from a broad range of people,” they say.

Endy and Zoloth had already questioned the scientific rationale for synthesizing a human genome in May, when HGP-write was first aired at an invitation-only meeting at Harvard University that was attended by more than 100 scientists, entrepreneurs, lawyers and ethicists. The closed nature of the meeting also attracted criticism: Church told the health and medicine news service Stat that this was because the paper describing the effort was under embargo.

“There was a lot of confusion on the day about what was going on,” says Tom Ellis, a synthetic biologist at Imperial College London, who attended the meeting. “Some people were in the know on the [paper’s] review process and others were trying to find out.”

The three-page announcement of HGP-write fills in some detail. It notes that current technologies are both too expensive and too primitive to synthesize the 3-billion-base-pair human genome. The team calls for a series of pilot projects, including synthesizing much shorter segments of the genome and making slimmed-down chromosomes to do specific tasks, to make its eventual goal doable. The whole project should require less than $3 billion (the price of the publicly funded Human Genome Project), the researchers say.

“I think it’s a brilliant project,” says Paul Freemont, a structural biologist at Imperial College London, who attended the meeting. “If you want to do this, it’s going to be on the same scale as the Human Genome Project, it’s going to need some big funding agencies and hundreds and hundreds of researchers around the world.”

Ellis and others worry that a centralized project that explicitly focuses only on the human genome might needlessly narrow the products of the effort. But Boeke — who in 2014 reported synthesizing a 270,000-base-pair yeast chromosome2 — brushes that objection aside. He envisions HGP-write eventually producing synthetic genomes from mice, microbes and all sorts of organisms.

“Tangible products may be slow to follow at first, but writing DNA more cheaply and at large scale will make researchers more efficient and comprehensive in their work, leading to practically unlimited potential for indirect products,” adds Danielle Tullman-Ercek, a biochemical engineer at the University of California, Berkeley.

Cheaper DNA synthesis isn’t the only thing that stands in the way of writing a human genome that could function inside a cell. Ellis says that there are no methods for inserting very large pieces of DNA into a mammalian cell and making them function normally, and researchers have little clue how to design a complex genome that has anything more than trivial changes to an existing one.

Freemont worries that commercial bodies such as DNA-synthesis companies may stake a claim on the project. “I think it’s good if this is an open, publicly funded initiative,” he says.

Boeke would prefer that there be no intellectual-property restrictions on the products of HGP-write, as is the case with his synthetic yeast genome project. But, he says, the “chances are good” that companies involved in HGP-write will be granted such rights “to get the job done”. To allow wider access, the effort may establish patent pools to allow users to easily license the fruits of the project, he adds.

In the Science article, the HGP-write team says that it will seek broader public buy-in before beginning work. Boeke says that much of the Harvard meeting centred on the ethics of the project.

Boeke also says that the synthetic cells will be engineered to make reproduction impossible. “We’re not trying to make an army of clones or start a new era of eugenics. That is not the plan.”