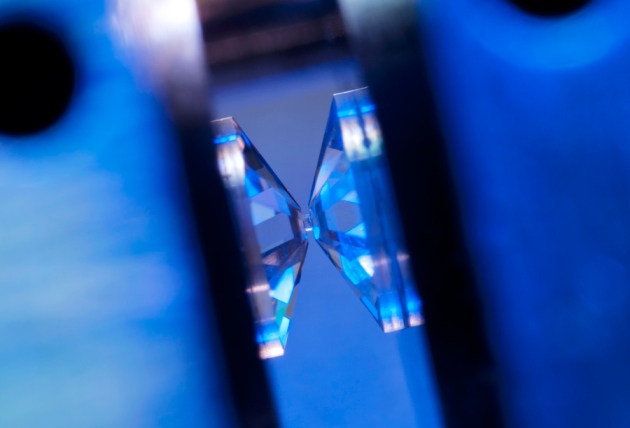 Under pressure: physicists aren't convinced by a claim that hydrogen has been squeezed to a metallic form inside a diamond-tipped anvil.

Two physicists say that they have crushed hydrogen under such immense pressures that the gas became a shiny metal — a feat that physicists have been trying to accomplish for more than 80 years.

But other researchers have serious doubts about the claim, the latest in a field with a long history of failed attempts.

Ranga Dias and Isaac Silvera, both physicists at Harvard University in Cambridge, Massachusetts, first posted a report of their results on the arXiv preprint server last October1, which attracted immediate criticism. A peer-reviewed version of the report was published on 26 January in Science2, but sceptics say that it includes little new information.

Five experts told Nature’s news team that they do not yet believe the claim, and need more evidence. “I don’t think the paper is convincing at all,” says Paul Loubeyre, a physicist at France’s Atomic Energy Commission in Bruyères-le-Châtel.

Silvera and Dias say that they wanted to publish their first observation before making further tests on their fragile material.

Producing metallic hydrogen in the laboratory has been a dream of high-pressure researchers ever since 1935, when theorists first predicted its existence3. When squeezed with enough pressure inside an anvil, hydrogen should be able to conduct electricity, the hallmark of a metallic state. And theorists say that the material could have other exotic properties, such as being a superconductor — able to conduct electricity without resistance — even at room temperature.

By making metallic hydrogen, physicists might also be able to explore planetary science at their lab bench: gas-giant planets such as Jupiter are theorized to have metallic hydrogen in their cores, which would perhaps explain how they can sustain a magnetic field.

In recent years, physicists have crushed tiny samples of hydrogen between diamond anvils at pressures exceeding those in the centre of Earth. The experiments are delicate and fraught with potential for error. Researchers have seen the material change from transparent to dark as it is compressed, which suggests that as electrons are crowded together, they are able to absorb photons of visible light. But no one has proven the existence of metallic, shiny hydrogen, which would reflect light. In 2011, a report4 by physicists at the Max Planck Institute for Chemistry in Mainz, Germany, was controversial. Mikhail Eremets, who leads that group, says his team has not yet provided conclusive evidence.

Dias and Silvera say that they were able to squeeze their hydrogen gas at greater pressures than anyone else has managed. To do so, they used an anvil that can fit inside a cryostat, enabling them to cool their hydrogen sample to just above absolute zero. They also say they have found a better way to polish the tips of their diamonds, to remove irregularities that could break the gems. They then turned a screw to crank up the pressure to 495 billion pascals (495 GPa), or almost 5 million times higher than atmospheric pressure at sea level.

“Then, suddenly, it becomes a lustry, reflective sample, which you can only believe is a metal,” Silvera says. Seen through a microscope, the sample appeared shiny, and it reflected light in the way metallic hydrogen should do, he says.

Other researchers aren't convinced. It’s far from clear that the shiny material the researchers see is actually hydrogen, says geophysicist Alexander Goncharov of the Carnegie Institution for Science in Washington DC. Goncharov has criticized the Silvera lab’s methods before. He suggests that the shiny material may be alumina (aluminium oxide), which coats the tips of the diamonds in the anvil, and may behave differently under pressure.

Loubeyre and others think that Silvera and Dias are overestimating the pressure that they reached, by relying on an imprecise calibration between turns of the screw and pressure inside the anvil. Eugene Gregoryanz, a physicist at the University of Edinburgh, UK, adds that part of the problem is that the researchers took only a single detailed measurement of their sample at the highest pressure — making it hard to see how pressure shifted during the experiment.

“If they want to be convincing, they have to redo the measurement, really measuring the evolution of pressure,” says Loubeyre. “Then they have to show that, in this pressure range, the alumina is not becoming metallic.”

But Silvera says that he just wanted to get the news out there before making confirmation tests, which, he says, could break their precious specimen. “We wanted to publish this breakthrough event on this sample,” he says. To preserve the material, he and Dias have kept it in the cryostat; the lab has only two cryostats, and the other is in use for other experiments, he says. “Now that the paper has been accepted, we’re going to do further experiments.”

Despite the scepticism, press-release materials issued by Science and by Harvard University confidently proclaim that metallic hydrogen has been made. “This is the holy grail of high-pressure physics,” Silvera says in Harvard’s press release. “It's the first-ever sample of metallic hydrogen on Earth.”