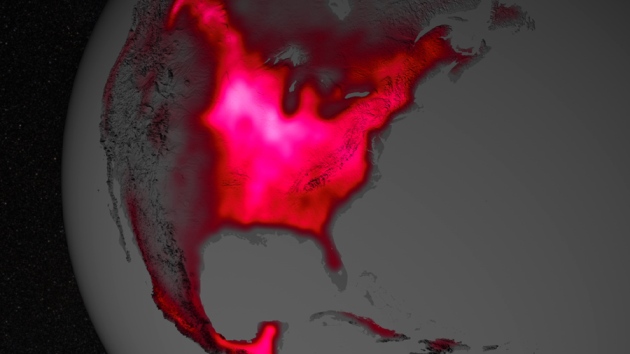 A fluorescent glow emitted by plants during photosynthesis is picked up by satellite imaging, emphasizing high crop productivity in the US Midwest.

If everything goes to plan, on 1 July NASA will attempt to launch its first carbon-monitoring satellite — for the second time.

The US$465-million Orbiting Carbon Observatory-2 (OCO-2) is designed to collect precise, high-resolution measurements of the carbon dioxide in Earth’s atmosphere. It is a near-copy of a NASA probe that crashed in 2009 before it reached orbit, devastating the scientists who had hoped to use its data to map sources and sinks of the greenhouse gas — both man-made and natural — in unprecedented detail.

Once OCO-2 reaches orbit, its spectro­meter will sample a column of air extending from the upper atmosphere down to Earth’s surface, taking hundreds of thousands of measurements each day and covering the entire globe every 16 days. Although it will not be the first probe to track CO2 from space, the satellite will do so at a higher resolution than its predecessors. Each OCO-2 reading will sample a column of the atmosphere above roughly 3 square kilometres of Earth’s surface — much smaller than the 85-square-kilometre footprint of a similar Japanese probe, the Greenhouse Gases Observing Satellite (GOSAT), which launched in 2009 and is still operating.

This unprecedented resolution allows OCO-2 to measure CO2 more accurately in cloudy areas such as the tropics, says Annmarie Eldering, OCO-2’s deputy project scientist at NASA’s Jet Propulsion Laboratory in Pasadena, California. Others hope that it will also allow OCO-2 to go beyond large natural sources and sinks, such as oceans and forests, to detect CO2 emanating from sprawling urban areas or even large power plants.

“We should clearly be able to see large metropolitan ‘super-cities’ like Los Angeles,” says Paul Wennberg, an atmospheric scientist at the California Institute of Technology in Pasadena who helped to develop the network of ground-based monitoring stations that will be used to test the quality of OCO-2’s data. He hopes that the satellite will be able to confirm ground-based measurements that show a small increase in CO2 levels above Pasadena each day as emissions from the greater Los Angeles area pool in the low atmosphere. 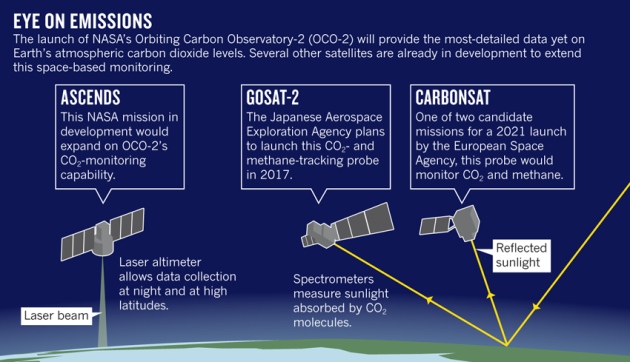 Such data, combined with ground monitoring and inventories of fossil-fuel consumption, could be a powerful tool for pinpointing greenhouse-gas sources, says Kevin Gurney, a carbon biogeochemist at Arizona State University in Tempe. “When we talk to policy-makers they say, ‘One number for the whole city is lovely, but we need to know what is emitting’.”

OCO-2 will also closely monitor the carbon uptake of plants by measuring the weak fluorescence that is produced during photosynthesis as plants’ chlorophyll pigments absorb light to capture energy and subsequently re-emit photons at longer wavelengths. Researchers have already tested the method using observations from GOSAT and the Global Ozone Monitoring Experiment 2 (GOME-2) instrument aboard the European meteorological satellite MetOp-A — with surprising results. An analysis of GOME-2 data published in April suggests that carbon-cycle models underestimate peak photosynthetic output by as much as 50–75% in parts of India, China and the African Sahel, and by 40–60% in the ‘corn belt’ of the US Midwest, which accounts for more than 40% of the world’s maize (corn) production (L. Guanter et al. Proc. Natl Acad. Sci. USA 111, E1327–E1333; 2014).

The results “jumped out at us right away”, says Joanna Joiner, an atmospheric physicist at the NASA Goddard Space Flight Center in Greenbelt, Maryland, and co-author of the study. Joiner, who helped to develop the space-based method for monitoring plant fluorescence, is eager to take measurements using OCO-2, the small footprint of which should allow researchers to detect fluorescence signals from plants in more fragmented landscapes such as Europe’s. Analyses by GOSAT and GOME-2 have been limited to vast expanses such as North America’s boreal forests, the Amazon rain­forest and the US corn belt.

OCO-2 is designed to last just two years, although NASA has loaded the probe with enough fuel to keep it running for 10 to 12 years. The space agency is developing another CO2-observing satellite, the Active Sensing of CO2 Emissions over Nights, Days and Seasons (ASCENDS) mission, to follow OCO-2. The multifrequency laser on ASCENDS would allow researchers to measure atmospheric CO2 at night and at high latitudes in all seasons, something that the spectrometers on GOSAT and OCO-2 cannot manage, because they require sunlight to detect the characteristic absorption signal of CO2 (see ‘Eye on emissions’). Both Japan and Europe are also developing next-generation CO2-monitoring satellites.

NASA hopes to install a duplicate of the OCO-2 instrument (originally built as a flight spare) on the International Space Station in 2017, at a cost of roughly $120 million. The station’s low-Earth orbit would allow the spectrometer — dubbed OCO-3 — to gather data at different times of day from OCO-2, which follows a Sun-synchronous path and thus passes over areas in their early afternoons. Wennberg says that combining such measurements with OCO-2 data could help researchers to detect hourly variations in CO2 production caused by plant photosynthesis — or even by rush-hour traffic in some large urban areas.

Plans for OCO-3 were dealt a blow in March, when US President Barack Obama proposed a NASA budget that did not include funding for the carbon-sensing project. But the agency says that it could revive OCO-3 if money becomes available. “We hope to get back to OCO-3,” says Betsy Edwards, programme executive for OCO-2 at NASA in Washington DC. “We are putting it into a position where we could do that at any time.”