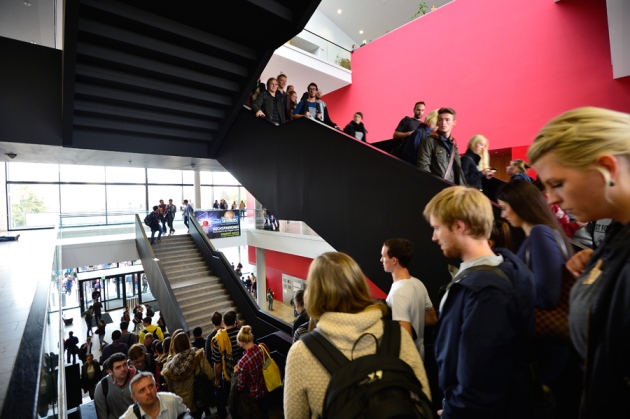 Germany's universities and large science organizations have been promised a continuing windfall to help them to cope with rising student enrolment and increasing competition for grant money. Political leaders have pledged €25.3 billion (US$31.6 billion) over the next six years to support special programmes for research and higher education — funding that should cover the growing student bodies and guarantee a 3% annual boost in the budgets of major research institutions.

Germany, which is celebrating the twenty-fifth anniversary of the fall of the Berlin wall, is the most populous nation in the European Union and the continent's largest economy. With a research-and-development expenditure of about €100 billion per year — about two-thirds of which is corporate money — the country is already the fourth-highest science spender worldwide, behind the United States, China and Japan. Funding for special programmes remained strong even after the global financial crisis of 2008, but for more than a decade universities have complained about a lack of support for ongoing expenses.

The commitment to boost research and higher education came out of a meeting of science ministers from the federal government and Germany’s 16 states on 30 October. The decision, which the federal and state governments are expected to approve on 11 December, fulfils key promises that Chancellor Angela Merkel made to the science community during her re-election campaign last year.

The bulk of the money is to be earmarked for universities, which are creaking under increasing numbers of students. Currently, some 2.6 million are enrolled at Germany’s roughly 300 universities — around 400,000 more than in 2005. First-year enrolment is projected to grow by another 360,000 or so by 2020. To cope with this surge, the government plans to continue the ‘university pact’ launched in 2007, in which the federal government and the states pledged to jointly contribute a total of nearly €20 billion (€26,000 per first-year student projected) to the programme by 2020. One use for the money would be to hire thousands of lecturers and teaching assistants.

“We are very pleased,” says Horst Hippler, president of the German Rectors' Conference, which gathers the chiefs of the country's universities. “The agreement is an important step towards giving universities financial-planning security.”

Science will also benefit from the windfall. Ministers said that they will continue the pact for research and innovation, which has drawn envy from scientists around the world since it began in 2005. The pact guarantees non-university research organizations — including the Max Planck Society, the Fraunhofer Society, the Leibniz Association and the Helmholtz Association of German Research Centres — annual budget increases of 3% (against an inflation rate of less than 1%) until 2020. Since 2005, the combined budgets of the four organizations, which run a total of 254 institutes and large research centres, has increased from €5.2 billion to €7.9 billion.

The government plans to increase the budget of the DFG, Germany’s main grant-giving agency for university research, by 5% next year and by 3% annually from 2016 on. In 2015, the DFG will receive an overall €2.95 billion from the federal and state governments for funding individual and collaborative research, including overheads, in all fields of science and the humanities. Despite regular annual budget increases, the percentage of proposals funded by DFG individual grants programmes has dropped from 42.5% to 31.3% since 2010.

“These commitments are of utmost importance for the further development of the entire German research system, and especially for universities,” DFG president Peter Strohschneider told Nature.

Ministers also agreed in principle that hundreds of research collaborations funded in the 2012 final round of the German excellence initiative, a €4.6-billion university competition for top-up funds launched in 2006, may be continued beyond its initial expiration year of 2017. Specifics will be announced in 2016, when an international expert commission is expected to conclude its review of the initiative.

An earlier version of this story incorrectly described Germany as the third-biggest spender on science.