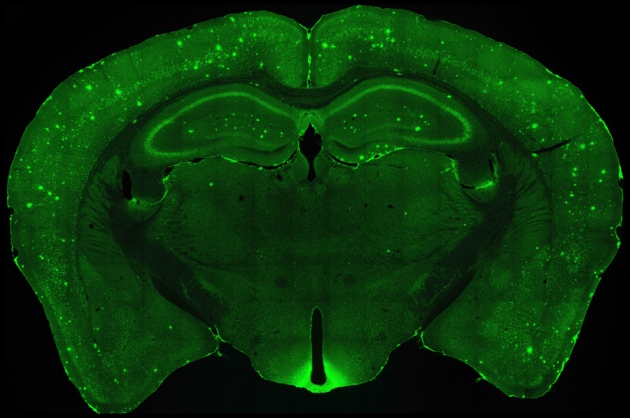 This cross-section of a mouse brain shows the amyloid protein clusters (green) that build up as Alzheimer's disease progresses.

People with Alzheimer's disease may forget faces or where they left familiar objects because their brains cannot find where they put those memories, a study in mice suggests.

The study, reported in Nature1, contradicts the notion that Alzheimer’s prevents the brain from making new memories. It also suggests that brain stimulation might temporarily improve the memories of patients in the early stages of the disease.

The research builds on earlier work by lead author Susumu Tonegawa, a neuroscientist, and his colleagues at Massachusetts Institute of Technology in Cambridge. Last year, they showed that in certain types of amnesia, memories were stored but could not be retrieved2.

It is difficult to detect the difference between a stored and a retrieved memory in humans, as the only way to test memory is to ask patients to recall information. But memories can be manipulated in mice, so Tonegawa and his colleagues tested their theory using two strains of mice with mutations in genes linked to Alzheimer’s disease.

These mice develop amyloid protein clusters, or plaques, in their brains and eventually lose their memories — just as humans with Alzheimer's disease do. The researchers demonstrated this memory loss by placing the mice in a box in which they received an electric shock. Normal mice learned to fear the box, but the mutant mice did not, because they did not remember being shocked.

Thinking inside the box

The researchers engineered the mutant mice to make a  light-sensitive protein in neurons in the hippocampus, the part of the brain that encodes short-term memories. Then the scientists placed the mice back into the box, shining a light onto the animals' brains to force the modified neurons to fire. This caused the mice to recall the memory of being shocked, and the animals froze — suggesting that the memory had been encoded in the first place. But the next day, the mice had again forgotten their fear of the box.

Next, the scientists pulsed the light, mimicking a process that occurs naturally as a memory is accessed repeatedly over time. This strengthened the connections between the hippocampus and another brain region called the entorhinal cortex, a connection that serves as long-term memory storage. With the memories now firmly embedded, the mice remembered to be afraid of the box, even when the light was off. 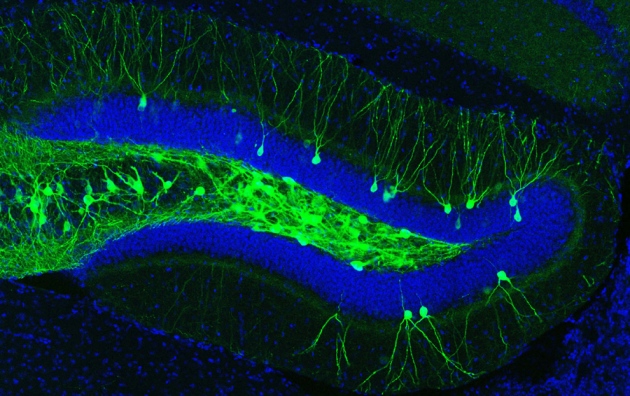 When the researchers dissected the animals’ brains, they found that the pulsing stimulation had created more connections between the hippocampus and the entorhinal cortex — connections that are lost as Alzheimer's disease progresses. But the researchers expect that the technique would only work for a few months in mice, or two to three years in humans, before the disease advances enough to erase any gains.

This theory about how Alzheimer's affects the brain agrees with symptoms seen in patients. For unknown reasons, the hippocampus is particularly vulnerable to the ravages of Alzheimer's, which is why a person with the disease first forgets new memories, such as where he left his car. As the disease worsens, other parts of the brain are destroyed, causing patients to forget long-term information such as family members’ names.

“It’s a beautifully executed study,” says Itzhak Fried, a neurosurgeon at the University of California Los Angeles. But he cautions that the findings may not translate to human brains, because mice do not develop amyloid plaques in the same way as humans do. And it is impossible to test whether the memory-retrieval hypothesis holds true in humans, because researchers have not worked out how to stimulate human brains using light.

Christine Denny, a neurobiologist at Columbia University in New York City, says that electrical stimulation may succeed where optogenetics has not. Early trials suggest that deep-brain stimulation of the hippocampus prompts the creation of neurons and improves memory in some Alzheimer's patients. But no one knows how it works3.

Tonegawa's findings may allow more targeted stimulation, especially once researchers understand what happens to memories after they leave the hippocampus. Several groups, including Fried’s, are already implanting such fine-tuned micro-stimulation devices into the entorhinal cortices of epilepsy patients with brain injuries in the hope of restoring memory abilities.

Fried says that it might soon be time to test microstimulation in very small groups of people with Alzheimer's disease. Although he acknowledges that it is important to do more animal work, especially in primates, “at the same time we’re crying for relief of clinical symptoms in patients who are really suffering”.