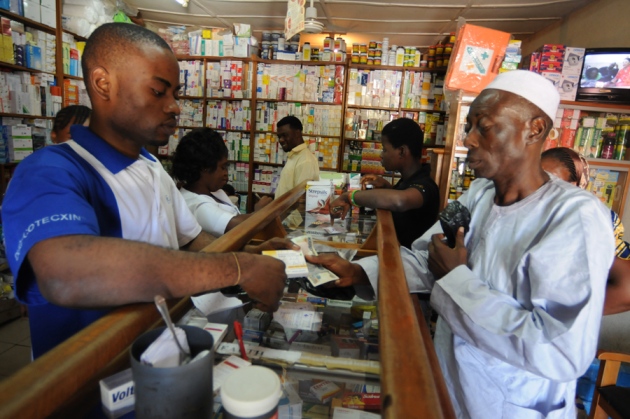 Is showering a country with low-cost malaria drugs the best way to stem the disease? As a US$463-million pilot programme to test the strategy in seven African countries winds down, public-health experts are questioning whether the approach makes sense given shrinking global health budgets and a steady decline in malaria prevalence.

Although no official decision has been announced about whether to continue the programme, known as the Affordable Medicines Facility – Malaria (AMFm), many of those familiar with it have told Nature that it must change or be phased out after this year.

“For me, the problem is that it has not been proven that the AMFm made a difference to malaria,” says Alan Court, senior adviser to the United Nations special envoy for malaria. “There has to be a public-health purpose or else there is no purpose.” Court is chair of the working group expected to recommend a path for the programme’s future on 14–15 November during a board meeting of the Global Fund to Fight AIDS, Tuberculosis and Malaria, which is based in Geneva, Switzerland, and oversees the AMFm.

When the AMFm was conceived in 2004, malaria rates in developing countries were skyrocketing, in part because the malaria-causing parasite Plasmodium falciparum had become resistant to the drug chloroquine. Officials worried that resistance would also develop to artemisinin — a newer and more effective drug— if people did not combine it with other therapies, but such combinations were much more expensive than either chloroquine or artemisinin alone.

The AMFm aims to make artemisinin-based combination therapies (ACTs) readily available and affordable in malaria-ridden countries by relying on the free market for their distribution. The AMFm subsidizes ACTs for drug importers in the pilot countries (Ghana, Kenya, Madagascar, Nigeria, Niger, Uganda and Tanzania), who then distribute the drugs to public and private vendors at low cost. Vendors can sell the drugs to anyone, even people who have not been diagnosed with malaria. The point is to make the drugs accessible to those who would otherwise not get them — such as children and people in rural areas. “I grew up very far from public-health facilities” in Cameroon, says Emmanuel Nfor, acting director of the AMFm, “so to me, the AMFm is not only a good idea, it is an excellent idea”.

Yet, although the AMFm subsidized 60% of the world’s supply of ACTs last year, it is unclear how many of the drugs reached the pilot programme’s target populations. Because anyone can buy the pills, people who can afford them may take them whenever they feel ill, whether or not malaria is the culprit. And although children under the age of five account for 86% of malaria deaths worldwide, the AMFm estimates that in 2011, only 36% of the subsidized ACTs bought by the private sector were for children’s formulations.

The Global Fund commissioned an independent evaluation by ICF International, a consulting firm in Fairfax, Virginia, and the London School of Hygiene and Tropical Medicine (LSHTM), UK, to look at the impact of the AMFm, but it has not settled the debate over the programme’s effectiveness. “We see that the AMFm has been a game-changer in the private for-profit sector,” says Sarah Tougher, a health economist at the LSHTM and part of the committee that evaluated the study (the preliminary report is available at go.nature.com/nsc6ck). According to Tougher, large changes in the price and availability of ACTs, as well as the share of the market supplied by private vendors, “were achieved in just a few months”.

But these benchmarks miss the point, says Mohga Kamal-Yanni, a senior health adviser at Oxfam GB in Oxford, UK. “You don’t need a huge independent evaluation to calculate that a huge subsidy will permit shopkeepers to buy and sell more of a drug,” she says. “Sales don’t mean anything unless you know who the sales are for.”

Testing before treatment was not considered essential when the AMFm was proposed because easy-to-use diagnostic tests were not available at the time. They are now, and they are also more relevant than they were in 2004 because malaria prevalence has declined since then. Today, in some AMFm-supported nations, a child with a fever is as likely to have pneumonia or another fever-inducing ailment as to have malaria.

With no way to know how much of the subsidized drugs have been wasted, leaders in global health will struggle to convince donors that the programme is cost effective. No one has yet stepped forward to fund the next phase, and the AMFm working group is debating modifications and exit strategies. “We are grappling with the cost of all of this,” Court says. “For example, we know that the vast majority of people who die of malaria are children; should we just target them?” 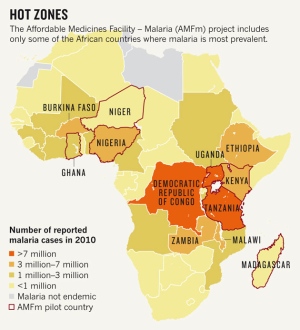 In one future scenario, a transformed AMFm would subsidize paediatric doses, which cost less than the adult formulations. But Albert Peter Okui, a programme manager for the National Malaria Control Programme in Kampala, Uganda, points out that adults could simply take multiple children’s doses if their versions are no longer on store shelves.

Another option is to reduce subsidies in countries with smaller burdens of malaria. Court says that this could allow for an expansion of the programme beyond the pilot countries, which were selected on the basis not only of malaria burden but also because private shops were heavily involved in drug distribution and because the countries had handled prior Global Fund grants effectively. An expanded programme could potentially reach countries such as the Democratic Republic of Congo, which in 2010 has more reported cases of malaria than four of the pilot countries — Ghana, Madagascar, Niger and Nigeria — combined (see ‘Hot zones’).

The United States, represented by the President’s Malaria Initiative, has a seat in the AMFm working group. In a document posted online on 28 September, the initiative states its concerns with the programme, including the overuse of ACTs by people who did not need them. The United States did not support the AMFm pilot directly because officials questioned whether a top-down subsidy to importers would get drugs to the most vulnerable groups.

Ultimately, donors will dictate whether the AMFm marches on, says Oliver Sabot, executive vice-president at the Clinton Health Access Initiative in Boston, Massachusetts, and a member of the AMFm working group. “People are committed to working their hearts out to find technical solutions,” he says, “but if there’s not enough funding we will need to roll back the whole thing.”

So much uncertainty just weeks before the decision is nerve-racking for officials in the pilot countries and for drug importers, hospitals and small pharmaceutical companies that depend on the subsidies. “We should be told about this,” says Sigsbert Mkude, a programme officer at the National Malaria Control Programme in Dar es Salaam, Tanzania. “We have little information about what comes next.”