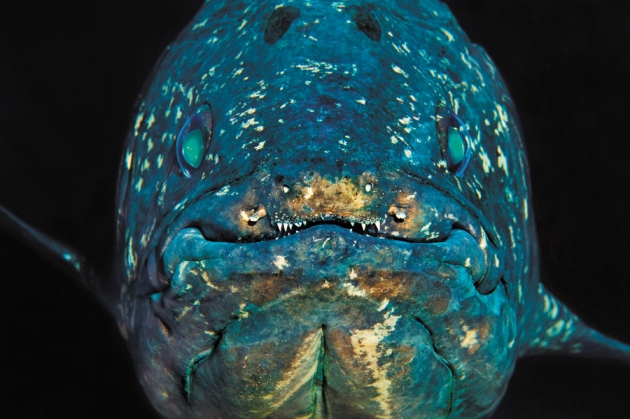 The African coelacanth is a close relative of the first fishes to venture onto land.

The South African fisherman who pulled a prehistoric-looking blue creature out of his net in 1938 had unwittingly snagged one of the zoological finds of the century: a 1.5-metre-long coelacanth, a type of fish that had been thought to have become extinct 70 million years earlier.

Since then, scientists have identified two species of coelacanth, one African and one Indonesian. With their fleshy, lobed fins — complete with bones and joints — and round, paddle-like tails, they look strikingly similar to the coelacanths that lived during the Cretaceous period, when dinosaurs still roamed Earth.

Now, an international team of scientists has sequenced and analysed the genome of the African coelacanth, Latimeria chalumnae; the findings are reported on page 311.

Like lungfish, the other surviving lineage of lobe-finned fishes, coelacanths are actually more closely related to humans and other mammals than to ray-finned fishes such as tuna and trout. Ancient lobe fins were the first vertebrates to brave the land, and the coelacanth genome is expected to reveal much about the origins of tetrapods, the evolutionary line that gave rise to amphibians, reptiles, birds and mammals, says lead author Chris Amemiya, a biologist at the University of Washington in Seattle. “The coelacanth is a cornerstone for our attempt to understand tetrapod evolution,” he says.

Ending one long-standing argument, analysis of the coelacanth genome clearly shows that it is not the closest living fishy relative to tetrapods, Amemiya says: that honour belongs to the lungfish. However, he adds, the lungfish genome is unlikely to be sequenced any time soon because it is much larger and more complicated than that of the coelacanth.

Although coelacanths are often called “living fossils”, these fish haven’t really been frozen in time, says co-author Kerstin Lindblad-Toh, a comparative genomicist at Uppsala University in Sweden. Comparison of protein-coding genes in coelacanths with those of cartilaginous fishes shows that the coelacanths have been steadily accruing DNA changes.

But the rate of change has been remarkably slow. The latest analysis shows that the genes of modern coelacanths can themselves be considered living fossils, says James Noonan, a geneticist at Yale University in New Haven, Connecticut.

“The coelacanth is a cornerstone for our attempt to understand tetrapod evolution.”

Scientists already had hints of the coelacanth’s sluggish evolution. In a 2012 study, researchers in Japan and Tanzania compared the DNA of the African and Indonesian coelacanths. Specifically, they looked at HOX genes, which help to guide embryonic development (K. Higasa et al. Gene 505, 324–332; 2012). Even though the two species separated, by one estimate, perhaps 6 million years ago, their genes are remarkably similar. For these particular genes, the difference between the two species of coelacanth was about 11 times smaller than that between the HOX genes of humans and chimps, two species that parted ways perhaps 6 million to 8 million years ago.

It is impossible to say for sure, but the slow rate of coelacanth evolution could be due to a lack of natural-selection pressure, Lindblad-Toh says. Modern coelacanths, like their ancestors, “live far down in the ocean, where life is pretty stable”, she says. “We can hypothesize that there has been very little reason to change.” And it is possible that the slow genetic change explains why the fish show such a striking resemblance to their fossilized ancestors.

The analysis showed that not all parts of the coelacanth genome are slow to evolve. The genome has a large number of transposable elements — non-coding parts of the genome that have an important role in gene regulation — that have been moving around in the genome at a relatively rapid pace. Non-coding DNA could be a significant source of evolutionary change, Lindblad-Toh says. But Amemiya adds that, for now, the role of non-coding DNA in speciation is “speculative”, and its significance in coelacanth evolution is not clear.

As expected, the genome holds clues to the genetic changes behind the transition from a lobed fin to a tetrapod limb, Amemiya says. For example, the analysis found that coelacanths and tetrapods share a regulatory gene sequence that helps to promote limb development. But other findings came as a complete surprise. The fish is the first vertebrate found to lack genes for immunoglobulin-M, an almost universal immune-system protein. Instead, it has two genes for a distantly related immune protein that evidently “pick up the slack”, he says.

Further analysis of the genome is bound to reveal much about our own distant past, adds Noonan. “It will allow us to identify the genetic drivers of tetrapod evolution, the genes and regulatory elements that are responsible for the vertebrate land transition.”