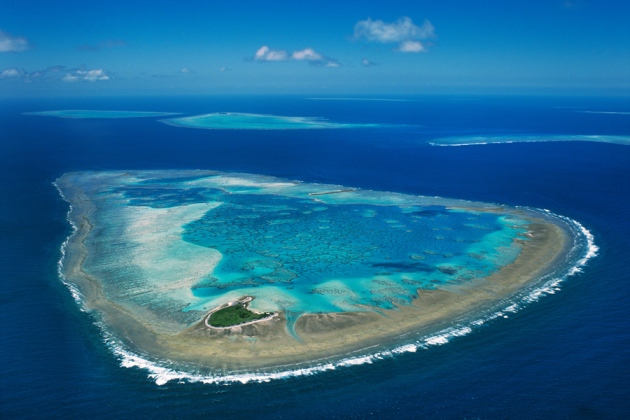 One Tree Reef in the Great Barrier Reef served as a natural laboratory for a study of ocean acidification.

Scientists have provided the first experimental evidence1 that rising carbon dioxide emissions are harming coral reefs in the wild.

A team led by Ken Caldeira, a climate scientist at the Carnegie Institution for Science in Stanford, California, used an alkaline substance to alter the chemistry of seawater at a small atoll in the Great Barrier Reef off Australia's east coast. The resulting drop in seawater acidity mimicked pre-industrial ocean conditions.

As a result, the rate at which coral reefs in the atoll grew increased by nearly 7% — suggesting that present-day CO2 emissions have slowed down coral growth by making seawater more acidic. “We’ve provided evidence, for the first time in a natural ecosystem, that ocean acidification is already affecting coral reefs,” says Caldeira.

The findings, published in Nature1, agree with laboratory studies indicating that corals — and other organisms that build their shells out of chalky calcium carbonate — suffer as seawater becomes more acidic. The chemical shift can slow the growth of calcium carbonate shells and skeletons, or even dissolve them2. Today’s oceans are already 30% more acidic than they were before the Industrial Revolution. If current trends continue, Caldeira says that ocean acidification could shift corals into a permanent state of decline by mid-century.

“The significance of this study is that it wasn’t done in a laboratory, so you are actually seeing the response in the field,” Richard Feely, a chemical oceanographer at the National Oceanic and Atmospheric Administration in Seattle, Washington.

Feely was part of a team that ran a series of similar experiments beginning in 2008 in oyster hatcheries on the US Pacific northwest coast. By manipulating the chemistry of the seawater piped into the indoor hatcheries, the scientists were able to counteract acidification and boost oyster production.

The experiment by Caldeira and his colleagues is the first to isolate the effect of acidification in a natural reef environment, although a previous study altered pH in “flumes” that partially enclosed small areas on the Great Barrier Reef3.

Researchers have documented damage to reefs in the field before4, but determining the factors at play can be tricky. In many cases, corals face harm from a combination of warming seas, coastal pollution and overfishing.

This has pushed most researchers studying ocean acidification to work in labs, where they can control and isolate various confounding factors — but those studies necessarily focus on individual coral species rather than entire reef ecosystems. 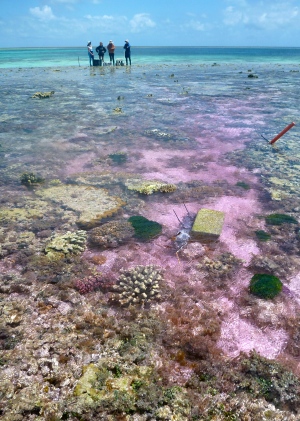 Researchers used a pink dye to help trace the movement of seawater across One Tree Reef.

For Caldeira's team, designing and running an experiment on a natural reef proved exceedingly difficult. But they were aided by the geography of their study site, One Tree Reef, a shallow atoll on the southern end of the Great Barrier Reef. A pair of lagoons on the island are submerged during high tide but exposed — and separated from the ocean — at low tide. For an hour each day, seawater drains from one lagoon to the other across a reef.

Turning back the clock

For 15 days, Caldeira’s team boosted the alkalinity in the upper lagoon by releasing sodium hydroxide, or lye, as well as a non-reactive dye. During another seven-day period, they released only dye. By measuring the concentrations of both additives upstream and downstream, the scientists were able to calculate the overall increase in calcification across the reef when the seawater chemistry was altered.

Caldeira says that his team's first two expeditions to the atoll failed to deliver clear data, because the team was measuring tiny differences in lye concentrations — equivalent to a couple of tablespoons of lye spread across 30–40 metres of reef. On its third and final expedition, the team added sampling stations and used more-precise instruments to analyse the water chemistry. “We were pushing up against the limits of detectability on these time scales,” he says.

In principle, the experiment supports the idea that humans may one day be able to artificially counteract ocean acidification and protect some reefs from the effects of ocean acidification. But Caldeira says that it would be impossible to pursue this strategy at any significant scale — and much wiser to reduce CO2 emissions.

David Kline, a marine ecologist at the Scripps Institution of Oceanography in La Jolla, California, says the results offer hope that cutting emissions would aid reefs. “This is a ray of light showing that if we actually do something politically about climate change, the reefs can respond,” he says.

For now, Caldeira's team is planning a second experiment — scheduled for September — that will help them to take a peek at possible future ocean conditions. Rather than adding an antacid to seawater, the researchers will add CO2 to boost acidity to levels that would be expected in 2100 if emissions continue to rise.