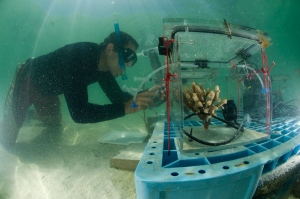 Organisms like coral are particularly vulnerable to ocean acidification.

A global effort to track ocean acidification has begun to take shape, as researchers this week made plans to set up an international network of monitoring stations.

The seas absorb roughly one-quarter of the carbon dioxide emitted into the atmosphere each year. This makes the water more acidic, and can affect sea creatures, even weakening the calcium carbonate shells or skeletons of organisms such as corals, oysters and some types of marine plankton.

Researchers estimate that ocean acidity has risen by about 30% since the Industrial Revolution in the nineteenth century, but they need better data to improve assessments of where the problem is most severe, and to model future trends.

Much of what is known about acidification comes from a handful of open-ocean sites that scientists have returned to monthly for the past few decades, and from research cruises that span the globe. “It’s a very expensive way to do monitoring,” says Richard Feely, an oceanographer at the US National Oceanic and Atmospheric Administration's Pacific Marine Environmental Laboratory in Seattle, Washington.

Feely helped to organize a meeting in Seattle on 26–28 June, involving oceanographers from more than 20 countries. They developed plans to build on existing observation networks, giving buoys and other monitoring devices the ability to make standardized acidification measurements. The group also plans to make acidification monitoring a routine part of ship-based measurements both on planned research cruises and private "ships of opportunity".

“What we’re trying to do is set up a large number of sites that have automated moorings that transmit back to researchers via satellite, and to use that data to verify models of ocean acidification,” says Feely. The group hopes that the number of monitoring sites can be increased from 20 to 60 in the next ten years. Each country will support its own acidification monitoring, so the expansion is contingent on national funding decisions.

The monitoring plan will be helmed by the Ocean Acidification International Coordination Centre, hosted by the International Atomic Energy Agency in Monaco, which launched the centre ahead of the United Nations' Rio+20 environment conference last week.

Coastal ecosystems currently have the least-coordinated monitoring efforts, says Toste Tanhua, a chemical oceanographer at the Leibniz Institute of Marine Sciences in Kiel, Germany. Yet these regions are among the most important to track. In the Pacific Northwest of the United States, for example, acidification is enhanced by natural upwelling of deep, cold waters that carry large amounts of dissolved carbon dioxide. The results can be devastating for oyster larvae: one Oregon oyster hatchery saw its yield drop by about 80% between 2005 and 2008 owing to strong upwelling — and climate change is predicted to increase acidification in this region1.

Local research teams provided monitoring equipment to warn hatcheries about upwelling water, allowing them to adjust their operations and wait for the acidic blast to pass. This strategy saved the Pacific Northwest oyster industry some US$35 million in 2011, says Feely. “That’s a very practical aspect of the observing system.”

South Korea’s coast also faces accelerated acidification, says Kitack Lee, a chemical oceanographer at the Pohang University of Science and Technology in South Korea. Major contributors are acid rain and high nutrient loads in the water — which increase the growth of marine algae, ultimately resulting in increased carbon dioxide emissions as that organic matter dies and degrades. Extra measurements are needed in the region to understand the relative impacts of these factors, says Lee.

In South Africa, “we’ve started looking at ocean acidification as a research priority in the past 12 months”, says Louis Celliers, a coastal scientist at the Council for Scientific and Industrial Research, based in Durban . “The big concern, especially for the east coast of Africa, is the high level of dependence on marine resources.” Coral reefs, for example, provide food and protection from storms and tsunamis, and are “an enormous benefit to coastal communities”.

But Celliers notes that it will not be easy to roll out extra acidification monitoring in Africa. “Right now there is not that urgency at a political level,” he says. “We want to be part of this community, but there is a bit of a mismatch of capacity and funding between developed countries and developing countries.”