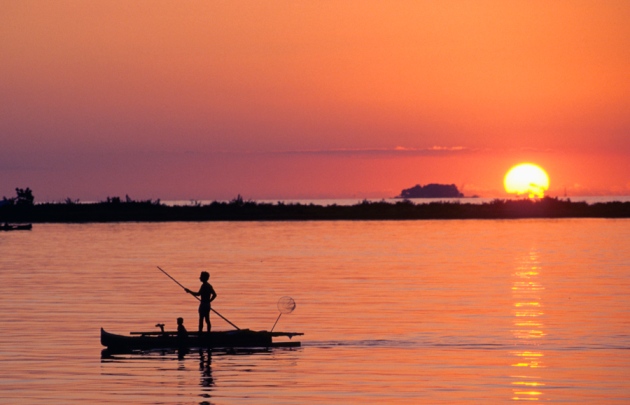 Warm water flows from the Pacific to the Indian ocean through the Makassar Strait in Indonesia.

The Indian Ocean may be the dark horse in the quest to explain the puzzling pause in global warming, researchers report on 18 May in Nature Geoscience1. The study finds that the Indian Ocean may hold more than 70% of all heat absorbed by the upper ocean in the past decade.

Scientists have long suspected that oceans have played a crucial role in the so-called warming hiatus by storing heat trapped in the atmosphere by rising levels of greenhouse gases. But pinpointing exactly which ocean acts as a global air conditioner has proved challenging.

Prior research suggested that a significant amount of heat moves from the atmosphere into the Pacific Ocean, where La Niña-like conditions have dominated since the turn of the century2. As a result, wind patterns and ocean currents have increased the drawdown of warm surface waters in the subtropics. This process and others enhance ocean heat uptake.

But when Sang-Ki Lee, an oceanographer at the University of Miami in Florida, and his colleagues went looking for this heat beneath the surface of the Pacific Ocean, they couldn’t find it. Temperature data compiled by the US National Oceanic and Atmospheric Administration’s (NOAA) World Ocean Atlas (WOA) suggest that the upper 700 metres of the Pacific have actually cooled in recent years, Lee says.

So Lee’s team used a computer model to explore the fate of the ocean’s 'missing heat'. The results suggest that easterly trade winds have strengthened during the hiatus, causing warm water to pile up in the western Pacific. The water seeps between the islands of Indonesia and into the Indian Ocean, bringing heat with it.

In the model, this surge of water produces dramatic warming in the upper Indian Ocean starting in the early 2000s, in agreement with the WOA data, the authors write. This explanation also fits with measurements of flow through the largest Indonesian channel — the Makassar Strait — which increased over the same period of time. 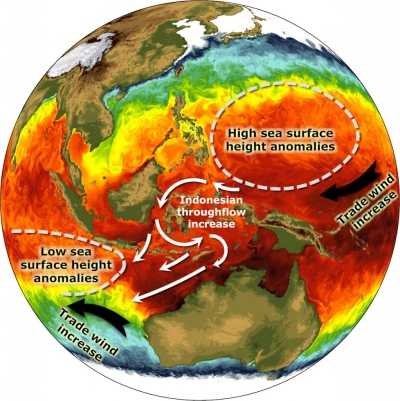 Changing patterns of trade winds and ocean currents have stored heat in the Indian Ocean.

“The big story is that they’ve found the heat,” says Matthew England, an oceanographer at the University of New South Wales in Sydney. He says the study solidifies the Pacific’s role in driving the hiatus. “It’s resolving a question that has a lot of people stumped.”

However, some say the case isn’t closed yet. Lee's team only analyzed trends in the upper 700 metres of the ocean, but “there’s evidence that a significant part of the heat has been going down into the mid and deeper layers,” says Gerald Meehl, a climate scientist at the US National Center for Atmospheric Research (NCAR) in Boulder, Colorado. Previous studies suggest that one-third or more of the total ocean warming has occurred below the depths considered in the new study3–5.

Kevin Trenberth, also a climate scientist at NCAR, says the results disagree with studies that use alternatives to the WOA data. There are large observational gaps in the WOA dataset, and Trenberth says that NOAA has accounted for these without considering the long-term warming of the ocean, leading to cooler values where measurements are missing.

For instance, Trenberth and his colleagues found pronounced Pacific warming during the hiatus and only modest warming in the Indian Ocean using heat content estimates derived in part from satellite measurements3. Other studies have also implicated warming in the North Atlantic and Southern Ocean.

For now, it seems that the hunt for the missing heat may continue. But scientists say it is important to get to the bottom of the story to fully explain the current hiatus and prepare for others that might occur in the future. “We need to understand the energy imbalance of the Earth,” Lee says.