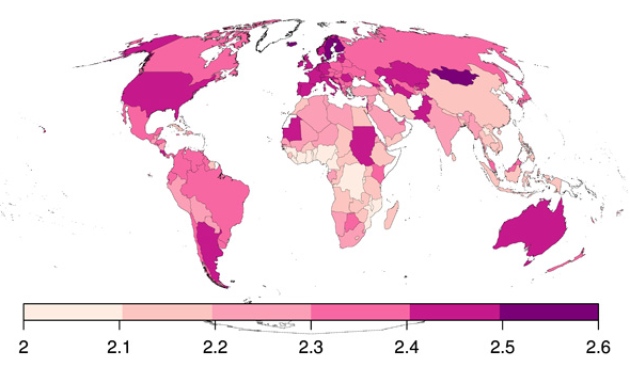 A country-by-country breakdown of the median human trophic level, which shows humans' place in the global food chain on a scale that goes from 1 (organisms such as plants that get their energy from the Sun) to 5.5 (top predators such as polar bears or orcas).

The fast-growing economies of China and India are driving a global increase in meat consumption, cancelling out decreases elsewhere, according to a comprehensive study of global food consumption.

The work, published today in Proceedings of the National Academy of Sciences1, takes a detailed look at what people eat, as well as trends from one country to the next. It is also the first time that researchers have calculated humanity's trophic level, a metric used in ecology to position species in the food chain.

The metric puts plants and algae, which make their own food, at trophic level 1. Rabbits, which eat plants, occupy level 2. Foxes, which eat herbivores, sit at trophic level 3. Cod, a fish that eats other fish, claims level 4. Polar bears and orcas, which have few or no predators and eat other mammals with gusto, hold the top positions — levels up to 5.5.

The study, led by Sylvain Bonhommeau, a fisheries scientist at the French Research Institute for Exploitation of the Sea in Sète, estimates that humanity's global median trophic level was 2.21 in 2009, which puts us on a par with other omnivores, such as pigs and anchovies, in the global food web. “We are closer to herbivore than carnivore,” says Bonhommeau. “It changes the preconception of being top predator.”

The study also looked at how eating patterns have changed over time. The researchers calculated the human trophic level for 176 countries for each year from 1961 to 2009 using a data on 102 types of food — from animal fat to yams — compiled by the Food and Agriculture Organization (FAO) of the United Nations. 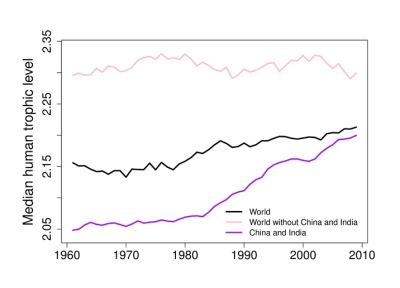 Globally, the human trophic level increased by 3% from 1961 to 2009, driven largely by more meat consumption in India and China.

Over 50 years, an increase in fat and meat consumption has moved us further up the food web, with the global median human trophic level increasing 3% — or about 0.06 — during the period.

“It seems like a small difference, but when you think about how it’s calculated, it’s big,” says Thomas Kastner, an environmental scientist at Alpen-Adria University in Vienna, who was not involved in the study. An organism’s trophic level is calculated by summing the trophic levels of the foods in its diet and the proportion in which they are consumed. “A change by 0.1 means you are eating considerably more meat or animal-based foods,” says Kastner.

But changes were not uniform across the globe. Countries such as China and India, where hundreds of millions of people have lifted themselves out of poverty — and often out of diets that involved little more than rice — have shown marked increases in their trophic level. However, places such as Iceland, Mongolia and Mauritania, where traditional diets are mostly based on meat, fish or dairy, have seen their trophic levels decline as they diversified their daily fare.

Calculating human trophic levels reveals our place in the ecosystem and can help scientists to understand human impact on energy consumption and resource strength. Calorie for calorie, the environmental impact of producing meat — in terms of everything from carbon emissions to water use — is typically many times larger than that of producing vegetable foods. Furthermore, a 2006 FAO study2 found that the livestock industry is directly or indirectly responsible for 18% of global greenhouse-gas emissions — a larger share than all modes of transport combined. “If we all increase our trophic level, we’ll start to have a bigger impact on ecosystems,” says Bonhommeau.