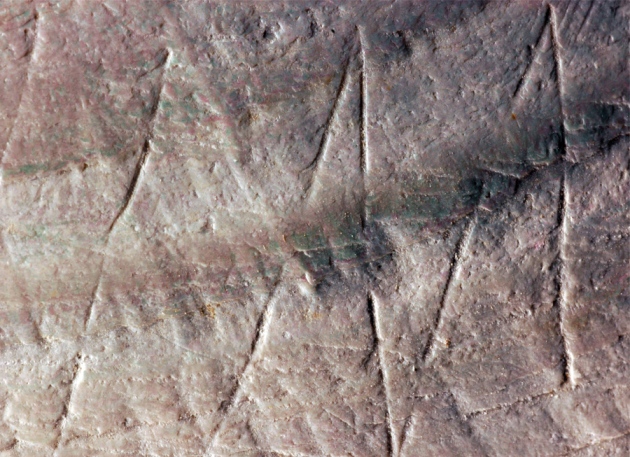 A shell found on Java in the late 1800s was recently found to bear markings that seem to have been carved intentionally half a million years ago. The photograph is about 15 millimetres wide.

A zigzag engraving on a shell from Indonesia is the oldest abstract marking ever found. But what is most surprising about the half-a-million-year-old doodle is its likely creator — the human ancestor Homo erectus.

"This is a truly spectacular find and has the potential to overturn the way we look at early Homo," says Nick Barton, an archaeologist at the University of Oxford, UK, who was not involved in the discovery, which is described in a paper published online in Nature on 3 December1.

By 40,000 years ago, and probably much earlier, anatomically modern humans — Homo sapiens — were painting on cave walls in places as far apart as Europe2 and Indonesia3. Simpler ochre engravings found in South Africa date to 100,000 years ago4. Earlier this year, researchers reported a 'hashtag' engraving in a Gibraltar cave once inhabited by Neanderthals5. That was the first evidence for drawing in any extinct species.

But until the discovery of the shell engraving, nothing approximating art has been ascribed to Homo erectus. The species emerged in Africa about 2 million years ago and trekked as far as the Indonesian island of Java, before going extinct around 140,000 years ago. Most palaeoanthropologists consider the species to be the direct ancestor of both humans and Neanderthals.

The engraved shell, from a freshwater mussel species, was collected in the 1890s by the Dutch palaeontologist Eugène Dubois, at a site in eastern Java called Trinil. There, Dubois discovered the first Homo erectus fossil — a skullcap — and other ancient human bones. He also brought home dozens of shells excavated from the site. They were examined in the 1930s and then packed away into a box in a museum in Leiden, the Netherlands. 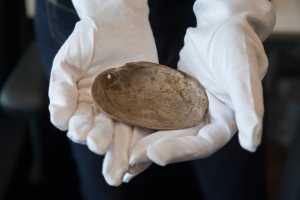 The shell, from a freshwater mussel, shows a hole made by a member of Homo erectus.

The engraving might have stayed undiscovered, were it not for Josephine Joordens, a biologist at Leiden University. She had been working a project on how H. erectus used marine resources at Trinil, which is around 80 kilometres inland from the Java Sea. She found only freshwater shells, yet some contained small perforations, a few millimetres wide, that were made with a sharp object. This suggested that someone had used a tool such as a shark tooth to crack open the shell — like using an oyster knife, says Joordens.

A visiting colleague photographed the shells and later noticed a faint zigzag pattern on one. “People never found this engraving because it's hardly visible,” says Joordens. “It's only when you have light from a certain angle that it stands out.”

Close inspection under the microscope suggested that the engraving was intentional. The weathering patterns of the grooves, each of which is about 1 centimetre long, show signs of significant ageing, and there are no gaps between turns, indicating that the maker paid attention to detail. He or she probably made the engraving on a fresh shell, and the newly made etching would have resembled white lines on a dark canvas, Joordens’ team notes. Sand grains still embedded in the shell were dated to around 500,000 years ago.

"We've looked at all possibilities, but in the end we are really certain that this must have been made by an agent who did a very deliberate action with a very sharp implement,” says Joordens. Her team tried replicating the pattern on fresh and fossilized shells, “and that made us realize how difficult it really was”, she says.

Saying much more about the engraving is tricky. “If you don't know the intention of the person who made it, it's impossible to call it art,” says Joordens.

“But on the other hand, it is an ancient drawing. It is a way of expressing yourself. What was meant by the person who did this, we simply don't know, ” she adds. “It could have been to impress his girlfriend, or to doodle a bit, or to mark the shell as his own property.”

Clive Finlayson, a zoologist at the Gibraltar Museum who was part of the team that described cross-hatch patterns linked to Neanderthals, is also agnostic about whether to call the H. erectus doodles art. What is more important, he says, is the growing realization that abilities such as abstract thinking, once ascribed to only H. sapiens, were present in other archaic humans, including, now, their ancestors.

“I’ve been suggesting increasingly strongly that a lot of these things that are meant to be modern human we’re finding in other hominids,” he says. “We really need to revisit these concepts and take stock.”