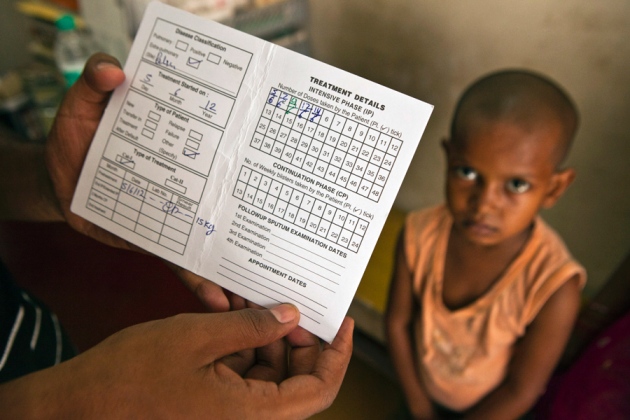 Courses of treatment against TB are becoming less and less effective as resistance to antibiotics increases.

It is never a good time to come down with tuberculosis, but in recent years the outlook has become worse.

Resistant strains of tuberculosis are on the rise, limiting treatment options despite decades of antibiotic research. In 2010, at least 650,000 cases of the disease were resistant to the two most effective frontline antibiotics, and in 2012, totally resistant and effectively untreatable strains of Mycobacterium tuberculosis — the bacterium behind the disease — were detected in India.

Now, two teams of scientists have published large catalogues of the mutations that confer resistance on M. tuberculosis after sequencing the complete genomes of hundreds of samples. Their studies, both published in Nature Genetics, greatly increase our understanding of the ways in which this long-term nemesis evades our most potent drugs1, 2.

“The biggest bottleneck to managing drug-resistant tuberculosis is the delay between suspecting it and confirming it,” says epidemiologist Megan Murray at the Harvard School of Public Health in Boston, Massachusetts, who co-led one of the studies. With a more complete list of resistance mutations, physicians could avoid giving patients drugs that will not help them, while quickly prescribing more appropriate treatments.

Murray’s team sequenced 123 strains from a worldwide collection and mapped the sequences on to an evolutionary tree. They then searched for mutations that were independently linked to resistance across different branches. They identified every part of the M. tuberculosis genome that was already linked to resistance, along with 39 new mutations.

The second team, led by Lijun Bi from the Institute of Biophysics in Beijing, part of the Chinese Academy of Sciences, sequenced 161 samples from Chinese patients and analysed them using a similar method. They identified 84 genes and 32 other regions that were strongly associated with drug resistance.

The two lists have few overlaps, probably because the teams used slightly different methods and studied strains that had evolved resistance from different genetic starting points. “However, the overall message is similar,” says Murray. “A lot more genes are implicated in the development of resistance than we thought, and we don’t really know what they do. There are a lot of ways for the organism to become resistant.”

In the classical view of resistance, M. tuberculosis picks up mutations in enzymes that either activate drugs or are targeted by them. “We’ve been stuck in this mould for too long,” says Robin Warren, a TB specialist from Stellenbosch University in South Africa and a co-author on Murray’s paper. “These new studies show that there’s much greater complexity to resistance than we dreamed of.”

Many of the resistance regions identified in both studies affect the waxy cell wall that surrounds M. tuberculosis cells. Some change its structure, or alter its permeability. Others influence the production of molecular pumps that evict drugs that get into the cells. And others boost the rate at which M. tuberculosis mutates, allowing it to pick up beneficial mutations more quickly.

The teams also identified mutations that are likely to influence other resistance genes, either boosting their activity or compensating for their detrimental effects, allowing the bacteria to carry them without being outcompeted by drug-sensitive strains.

But many of the regions that the teams identified have unclear roles. “For around half the genes in our list, we have a name but we don’t know what they do,” says Murray. For example, her list includes 16 genes from the PE/PPE family, which are unique to M. tuberculosis and its kin, and whose roles are largely unknown.

William Jacobs, Jr., a tuberculosis specialist at the Albert Einstein College of Medicine in New York, says that the teams now need to validate their lists. “You’ve got to be able to move the mutation, and show it causes what you think it causes,” he says.

Murray’s group made a start by introducing a mutation in the ponA1 gene into M. tuberculosis, and showing that the microbes could then withstand double the dose of rifampicin. “That’ll need to happen on a much larger scale for all of these genes,” she says.

These latest studies show that M. tuberculosis evolves resistance through several gradual steps with subtle effects. “It probably takes a bunch of these smaller steps to get to high-level resistance,” says Murray. David Alland of Rutgers University in Newark, New Jersey, supports this view through a third study, also published in Nature Genetics3. His team sequenced 63 clinical samples of M. tuberculosis that had been exposed to the frontline drug ethambutol. They found mutations in at least four genes that interacted to improve the bacterium’s ability to resist the drug, allowing some strains to shrug off 16-fold higher doses than others.

Understanding these step-wise pathways could help clinicians to monitor strains that are on the verge of evolving high-level resistance, or develop drugs that interfere with that evolution before it really gets going.

"This is a bit of a dream, really, since we are not at the point of developing TB drugs for specific targets. It's rather more hit and miss," says Helen Cox, an epidemiologist at the non-governmental organization Médecins Sans Frontières (also known as Doctors Without Borders), headquartered in Geneva, Switzerland. But, she adds, "The overarching message is that drug resistance is much more complex than the simple dichotomous 'resistant versus susceptible' understanding."