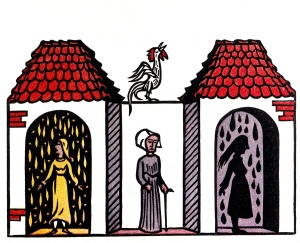 The European folk tale of the two sisters exists in 700 local versions, differing due to language gaps more than geographic distance. (The woodcut here, by Alfred Zacharias, illustrated the Grimm brothers' version of the story.)

This folk tale has hundreds of variants, and it has been passed on across Europe for centuries. But how similar your version is to mine depends not just on how far apart we live but also on how ethnically and linguistically different our cultures are, according to a new study.

If folk tales simply spread by diffusion, like ink blots in paper, one would expect to see smooth gradients in these variations as a function of distance. Instead, researchers found that language differences between cultures create significant barriers to that diffusion.

These barriers are stronger than those for the exchange of genes — a message that might be crudely expressed as: “I’ll sleep with you, but I prefer my stories to yours.”

In the study, a team of researchers in Australia and New Zealand used the statistical tools of population genetics to investigate variations in ‘The kind and the unkind girls’ across 31 European populations, such as Armenian, Scottish, Basque and Icelandic groups. Their results appear today in the Proceedings of the Royal Society B1.

“The geographic gradients we found are similar in scale to what we see in genetics, suggesting that there may be parallel processes responsible for mixing genetic and cultural information,” says lead author Quentin Atkinson, who studies human evolution at the University of Auckland in New Zealand.

“But the mechanisms aren’t identical,” Atkinson adds. “The effect of ethnolinguistic boundaries is much stronger for the folk tales than for genes.” This fits with recent studies looking at other aspects of culture, such as song2. “Our findings support predictions that cultural variation should be more pronounced between groups than genetic variation,” says Atkinson.

“This supports the view that our cultures act almost like distinct biological species,” says Mark Pagel, an evolutionary biologist at the University of Reading, UK, who specializes in cultural transmission. “Our cultural groups draw pretty tight boundaries around themselves and can absorb genetic immigrants without absorbing their cultures.”

Atkinson and his colleagues figured that the ubiquity of folk tales would make them a good proxy for cultural exchange. “This tale is widely known, and we were able to locate a large, well-documented collection that spanned all of Europe,” says Atkinson. “For example, some stories involve two cousins or brothers rather than daughters; in others it is a daughter and servant girl.” He and his colleagues found about 700 variants in all.

“Folk tales can be transmitted all over the world,” says Hans-Jörg Uther, a folklore specialist at the University of Göttingen in Germany. “The plot can stay the same while characters and other attributes change to match the cultural traits of the region.”

Uther finds the work interesting, but says that he is “a little bit sceptical about comparing variants while neglecting their historical context and mode of performance.” He suspects that, as digital archives of folk tales become increasingly available, they will provide a valuable tool for making comparative and evolutionary studies of culture more quantitative.