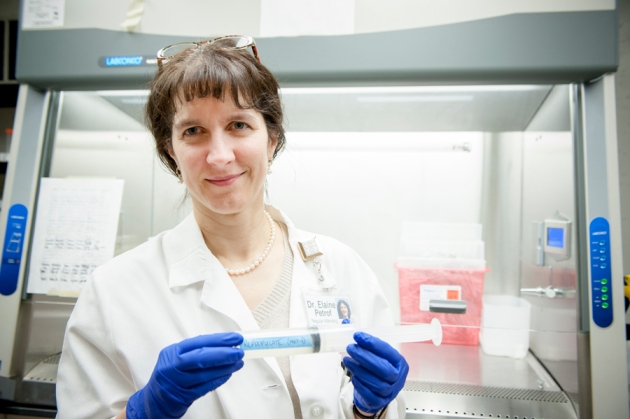 Elaine Petrof has invented a synthetic stool that could reset a patient’s gut bacteria to cure infections.

The brown slurry is piped through tubes into the top of the human body — or the bottom. It can even come in pill form. For years, doctors have been transferring faeces into ill people’s intestines to replace resident microbes with a fresh batch. The procedure is often a therapeutic success, but protocols for it vary wildly. As it steadily grows more popular, regulators are now working to define what a standard faecal transplant should be, and how to deliver one safely.

During a public workshop last month at the US National Institutes of Health in Bethesda, Maryland, the Food and Drug Administration (FDA) reaffirmed that it has authority over faecal transplants. The agency had said this for years to researchers and companies who asked privately, but the workshop was the first public forum in which the FDA broadcast that it regulates faeces like a drug.

Clinical trials of the procedures are not affected, because they were already subject to approvals from the agency. But US doctors performing faecal transplants as treatments must now submit an Investigative New Drug application to the FDA with details about their protocols. (The agency then has 30 days in which it can intercede and stop an experiment.) Jay Slater, director of the division of bacterial, parasitic and allergenic products at the FDA in Silver Spring, Maryland, says that the move is a crucial way for the agency to make sure that protocols are safe. But he adds that the FDA wants to avoid being too prescriptive for now, so that it can adopt the most effective, advanced protocols as they are developed.

Although it may be years before the agency weighs in on which method is the safest, it has ignited a debate among researchers over how faeces should be screened, processed, delivered — or even synthesized.

With faecal transplants, doctors aim to re­establish healthy microbe populations in the guts of patients. The procedure seems especially effective for people infected with Clostridium difficile, a diarrhoea-causing bacterium that in the past two decades has become more prevalent and antibiotic-resistant in the United States, where it now kills an estimated 14,000 people each year. A 2011 review of data from more than 300 patients concluded that faecal transplants can cure 92% of people with recurring C. difficile infections for which antibiotics prove ineffective (E. Gough et al. Clin. Infect. Dis. 53, 994–1002; 2011).

But there are many issues and unanswered questions. The method’s success against C. difficile has led to an “outrageous exuberance”, says Amee Manges, an epidemiologist at the University of British Columbia in Vancouver, Canada, who led the review. Some doctors are using faecal transplants to treat other conditions, for which effectiveness is less established — or not established at all. Faeces, if not properly screened, can transmit disease. Furthermore, it is too early to know which of the many protocols is the most effective. “Every­body has their preferences,” says Manges (see ‘Gut instinct’). Resourceful individuals can even get in on the act at home, by following step-by-step enema instructions from online videos.

The wide variation in clinical practice starts at the very source of the ‘drug’. Although evidence is lacking, some researchers suspect that the best stool comes from a patient’s blood relatives, who have genetic and environmental similarities with the patient that might influence their gut microbes. Other doctors use anonymous donors.

Preparation methods also differ. Some researchers freeze the stool for convenience, to use later. Others insist that it must be fresh — 6 hours old or less — to ensure that the bacteria do not die or change their behaviour during their time outside the colon. Fresh or frozen, the stool is mixed with a liquid — usually saline, although some researchers have tried water or even milk. Others are exploring synthesizing faeces from scratch (see ‘How to make a stool’).

How to make a stool

The runny, cloudy substance, developed by Elaine Petrof, an infectious-disease researcher at Queen’s University in Kingston, Canada, is one of the first prototypes of synthetic stool: a mixture of 33 microbes individually isolated from the faeces of a healthy donor and then recombined.

Petrof chose the donor after a stringent screening protocol, selecting a woman who was infection- and parasite-free and clear of chronic diseases and drugs, and who had taken antibiotics only once in her life, long ago.

For the microbe mix, Petrof chose a combination of beneficial bacteria and others known to support the overall microbial community, and threw the rest away. The chosen bacteria were grown in pure culture, then mixed together in saline solution at ratios that replicated their original proportions in the stool.

In January, Petrof and her colleagues published results showing that the slurry of microbes, called Re-POOPulate, could be used in faecal transplants, curing two people of life-threatening Clostridium difficile infections (E. O. Petrof et al. Microbiome 1, 3; 2013). To confirm the results, the team plans to enrol 30 people in a clinical trial.

When it comes to the mode of delivery, some researchers use enemas — easy to administer, but good for transplanting stool into only the lower end of the colon. Others use colono­scopies, which are more invasive but ensure that the stool makes it farther into the intestines.

Johan Bakken, an infectious-disease consultant at the University of Minnesota Medical School in Duluth, who has used faecal transplants to treat 120–130 people with C. difficile infections, delivers the preparation in a tube threaded through a patient’s nose into the small intestine. This, he argues, may be safer for people with disease-weakened intestinal walls that could be torn during enemas or colonoscopies. Thomas Louie at the University of Calgary in Canada avoids tubes altogether: so far, he has treated 33 people by delivering stool microbes orally, wrapped in three layers of medical-grade gelatin capsules.

Researchers generally agree that donors must be screened using standardized procedures if faecal-transplant therapies are to flourish. Many are concerned that inadequately checked material could contain pathogens, just as blood transfusions sometimes caused transmission of hepatitis C in the days before screening. Faecal screens tend to include tests for blood-borne pathogens such as HIV and hepatitis viruses, as well as intestinal pathogens and parasites. But some scientists have collected anecdotes of donors who were not even tested for obvious pathogens such as HIV and C. difficile.

One of the most pressing questions is which diseases can be treated effectively with faecal transplants. In addition to C. difficile infections, researchers have used the procedures to treat chronic problems such as Crohn’s disease, inflammatory bowel disease and multiple sclerosis, but in very small case studies. Some clinics are even recommending faecal transplants for obesity, Parkinson’s disease or autism spectrum disorder — although most doctors remain sceptical. More data and oversight are needed to enable researchers to learn which applications work and which do not, says Gary Wu, a gastro­enterologist at the University of Pennsylvania in Philadelphia. “Stool is a very complex mixture that we don’t fully understand,” he says.

Wu expects that researchers will eventually move to synthetic stool, a potentially safer and more consistent concoction. “But right now, we’re not at that point,” he says.

Some researchers expressed frustration with the FDA’s move to regulate faecal transplants. Infectious-disease specialist Trevor Van Schooneveld of the University of Nebraska Medical Center in Omaha, has performed about 20 such transplants since 2011, working with gastroenterologists. But in the past few weeks, he has turned away three patients while he submits the required Investigative New Drug application. Van Schooneveld questions whether the agency should preside over an organic, personal substance, rather than a drug. “How the FDA plans to regulate human faeces is a mystery to me,” he says.