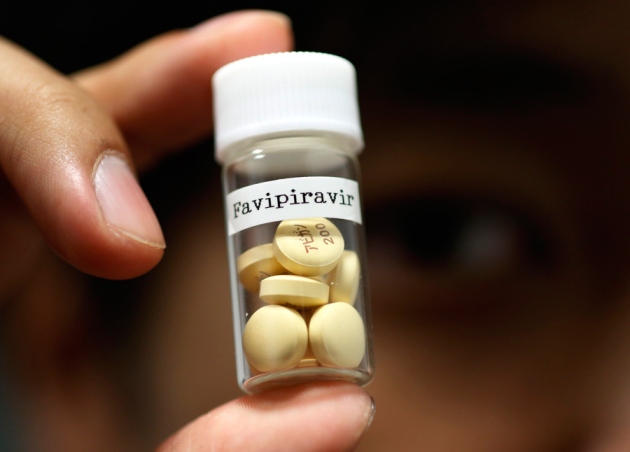 The drug favipravir will be tested in clinical trials against Ebola next month.

Three potential Ebola treatments will be tested next month at sites run by the medical-aid group Médecins Sans Frontières (MSF) in West Africa, the group said on 13 November. The treatments include two antiviral drugs and 'convalescent serum', composed of blood components taken from disease survivors.

A number of other trials are also being planned. US, European and African officials met this week to discuss which interventions should take priority in these tests.

Brincidofovir and favipiravir, the two drugs to be studied at the MSF sites, were selected after a review of safety and efficacy data, product availability and the logistics involved in administering the treatments to patients, the group said.

The brincidofovir trial will be run by researchers from the University of Oxford, UK, on behalf of the International Severe Acute Respiratory and Emerging Infection Consortium (ISARIC), a global initiative to aid response to disease outbreaks. The site of the trial, which is funded by the UK medical charity Wellcome Trust, has not been determined.

The favipiravir trial will be conducted in Guéckédou, Guinea, by INSERM, France's biomedical research agency. The convalescent-serum trial will be done in Conakry, Guinea, under the leadership of the Institute of Tropical Medicine in Antwerp, Belgium.

“Conducting clinical trials of investigational drugs in the midst of a humanitarian crisis is a new experience for all of us, but we are determined not to fail the people of West Africa,” said Peter Horby, an epidemiologist at the University of Oxford and the chief investigator of the brincidofovir trial, in the MSF release.

All three interventions have already been used in patients in the current epidemic, and were on the World Health Organization's shortlist of potential Ebola treatments.

Brincidofovir is a broad-spectrum antiviral being developed by the biopharmaceutical firm Chimerix in Durham, North Carolina. It has not yet been approved by US regulators. Favipiravir is made by the Japanese firm Toyama Chemical Company, owned by Fujifilm in Tokyo. The drug is approved in Japan for treatment of influenza and is intended to work against viruses that, like Ebola, carry their genetic information in the form of RNA. Convalescent serum — either whole blood or plasma taken from Ebola survivors — is thought to contain antibodies that help to clear the Ebola virus from patients' bodies.

US scientists have not yet announced which treatments will be tested in clinical trials that they plan to run in the United States and, possibly, in Liberia. Doctors and researchers organizing the trials met at the US National Institutes of Health in Bethesda, Maryland, on 11 November.

"We had good discussions,” says Clifford Lane, deputy director for clinical research and special projects at the US National Institute of Allergy and Infectious Diseases in Bethesda. “We are working on refining our adaptive-design protocol with specific arms based upon those discussions.”

MSF says that the trials at its sites will test whether the interventions boost the proportion of patients who survive for two weeks. It hopes to report initial results from the trials as early as February 2015.

MSF said previously that none of the trials run at its sites will assign patients to receive standard of care treatment rather than an experimental intervention. Whether or not to use a standard of care control group in these trials is a thorny and hotly debated question. The US trials plan to use a control group, but have not made final decisions about the trial design.