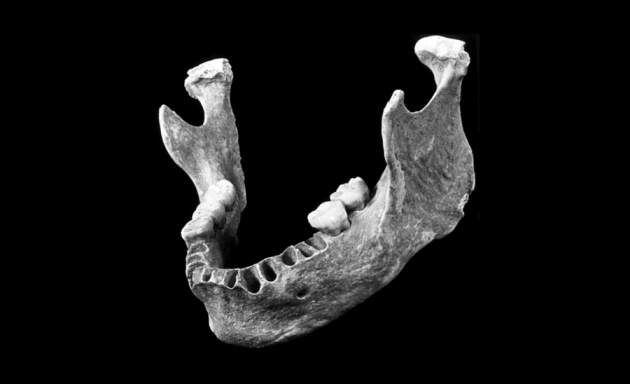 This 40,000–year–old human mandible, found in a Romanian cave, has a mix of human and Neanderthal traits; genetic analysis suggests the individual had a close Neanderthal ancestor 4–6 generations back.

One of Europe’s earliest known humans had a close Neanderthal ancestor: perhaps as close as a great-great-grandparent.

The finding, announced on 8 May at the Biology of Genomes meeting in Cold Spring Harbor, New York, questions the idea that humans and Neanderthals interbred only in the Middle East, more than 50,000 years ago.

Qiaomei Fu, a palaeogenomicist at Harvard Medical School in Boston, Massachusetts, told the meeting how she and her colleagues had sequenced DNA from a 40,000-year-old jawbone that represents some of the earliest modern-human remains in Europe. They estimate that 5–11% of the bone's genome is Neanderthal, including large chunks of several chromosomes. (The genetic analysis also shows that the individual was a man). By analysing how lengths of DNA inherited from any one ancestor shorten with each generation, the team estimated that the man had a Neanderthal ancestor in the previous 4–6 generations. (The researchers declined to comment on the work because it has not yet been published in a journal).

The DNA evidence confirms earlier arguments that the jaw and its attached teeth possessed a mix of human and Neanderthal traits. Its wisdom teeth, for example, are much larger than those of Homo sapiens. “I guess it’s reassuring at some level that there’s correspondence between what the anatomy is telling us and what the genes are telling us,” says Erik Trinkaus, a palaeoanthropologist at Washington University in St. Louis, Missouri, who has analysed the mandible and its attached teeth1, and has read Fu and her team’s work.

The jawbone was found among bear remains in a Romanian cave called Peștera cu Oase (meaning ‘cave with bones’) that was discovered by a group of speleologists in 2002. “The only access to the cave is by scuba-diving through an underground river,” says Trinkaus.

Trinkaus has long argued that the jaw and a skull from a second individual found in the same cave point to recent interbreeding between humans and Neanderthals. He says it is reassuring that Fu’s data back up his previous conclusions. “I can say ‘I told you so,’ but I’m not going to,” he says.

All humans who trace their ancestry beyond sub-Saharan Africa carry a sliver of Neanderthal DNA — around 1–4% of their genomes. Researchers have long thought it most likely that early humans exiting Africa interbred with resident Neanderthals somewhere in the Middle East around 50,000—60,000 years ago, before travelling on to Asia, Europe and the rest of the world.

That possibility has gained support in the past year. Last year, a team that included Fu used the genome of a 45,000-year-old human from Siberia to date his Neanderthal ancestors to between 50,000 and 60,000 years ago (when modern humans were probably starting to leave Africa)2. Another reported finding the 55,000-year-old partial skull of a human in an Israeli cave not far from sites at which Neanderthals lived around the same time3.

But radiocarbon dating of remains from sites across the continent suggests that humans and Neanderthals lived together in Europe for up to 5,000 years in some areas — plenty of time for them to have met and interbred there, too4.

The data from the jawbone imply that breeding did happen in Europe, and not just the Middle East, says María Ávila, an ancient-genomics researcher at Stanford University in California who attended Fu’s talk. “It also makes sense — why would it be limited to one specific region?” Ávila hopes that researchers may be able to determine how the Neanderthal portions of the Oase man's genome compare to the genomes of Neanderthals and to Neanderthal sequences found in humans today. But the extracted DNA was highly degraded, which might hinder such efforts. “I just don’t know how much data they have to do all these cool analyses. Hopefully a lot,” Avila adds.

Trinkaus points out that the jaw represents the ancestry of one man, not an entire population. It is not clear how often early humans and Neanderthals interbred in Europe. DNA from other human fossils that predate the extinction of Neanderthals some 35,000 years ago could build a fuller picture of the continent’s history.

“I started out my career trying to figure out why modern humans were ultimately more successful than Neanderthals. That was 40 years ago,” says Trinkaus. “I think we still don’t really know.”