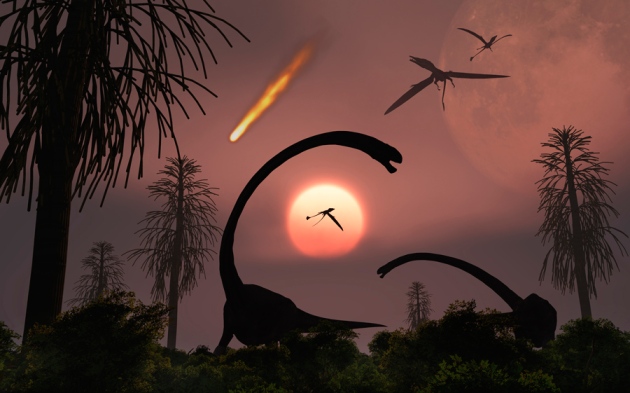 Mass extinctions such as the one that wiped out the dinosaurs seem to happen with regularity, pointing to possible cosmic causes.

A thin disk of dark matter running through the Galaxy might be behind the large meteorite strikes that are thought to be responsible for some of Earth’s mass extinctions, including that of the dinosaurs, two theoretical physicists have proposed.

The model is based on a hypothetical form of dark matter described by the authors and their collaborators last year1, 2 as a means to solve a separate cosmic conundrum. The existence of such a 'dark disk' could be tested soon by astronomical observations.

Mario Livio, an astrophysicist at the Space Telescope Science Institute in Baltimore, Maryland, who was not involved in the research, says that the latest idea, which brings together two speculative and very different theories, is “very interesting”, even if the evidence supporting it is far from compelling.

Meteorites regularly pepper Earth's surface. Thirty years ago, physicists suggested that this bombardment intensifies cyclically, pointing to some underlying cosmic cause. One proposed explanation is that the Sun has an as-yet-undetected companion star, dubbed ‘Nemesis’ or ‘Death Star’, that regularly swings by, sending comets from the remote Oort cloud flying into the inner Solar System3, 4. 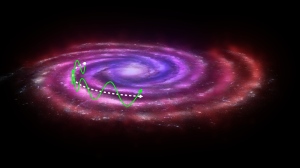 The Sun follows a snaking path as it circles the Milky Way.

In the latest paper,  theoretical physicists Lisa Randall and Matthew Reece, of Harvard University in Cambridge, Massachusetts, reignite another proposal5, 6, which puts the supposed periodicity down to the way the Sun — and the Solar System with it — move inside the Milky Way. As the Sun follows the swirling motion of the Galaxy's arms, circling around the galactic centre, it also moves up and down, periodically crossing the plane that cuts the Galaxy into a top and a bottom half like the two bread slices in a sandwich. The authors suggest that as the Sun oscillates up and down,  it crosses a denser layer of dark matter — like the ham in the middle — causing a gravitational push and pull that disturbs comets in the Oort cloud.

Previous models could not account for a gravitational force strong enough to cause the effect. But Randall and Reece show that a thin disk of dark matter at the centre of the Galaxy could do exactly that, causing comet storms with a periodicity of about 35 million years. This would match some weak statistical evidence found in recent surveys of impact craters. Their paper is due to appear in Physical Review Letters7.

Elizabeth Gibney tells the Nature Podcast how dark matter could have killed the dinosaurs.

Dark matter is usually thought to be very weakly interacting and thus unable to settle into such a disk. But the authors suggest that a small fraction of dark matter could behave very differently. Last year, they developed a theory of 'dissipative dark matter' in an attempt to explain dark-matter-like signals from the Galaxy's centre seen by the Fermi Gamma-ray Space Telescope8. Their model yields a dark disk about 35 light years (10 parsecs) thick, with a density of about 1 solar mass per square light year (10 solar masses per square parsec) — dense enough to trigger periodic comet showers.

Evidence for a 35-million-year cycle, based on the record of impact craters, is itself “sketchy”, says Randall. Fluctuations in the crater record mean that searches for periodicity are always likely to throw up some correlations, she says. So she and Reece flipped the problem around and predicted what the period would be, on the basis of their model. “If you then find a match it has much more statistical significance than it would otherwise,” she says.

They compared their model, using a 35-million year cycle, with the record of craters more than 20 kilometres wide and created in the past 250 million years. Compared to random comet bombardments, their model had a likelihood ratio of 3, meaning it agreed with the observed crater dates three times better than a random rate.

Astronomers should be able to test whether the dark disk exists and has the density predicted by the model. The European Space Agency’s Gaia mission, which launched last year, will map the gravitational field of the Galaxy and could rule out or confirm the presence of this darker disk.

But Coryn Bailer-Jones, an astrophysicist at the Max Planck Institute for Astronomy in Heidelberg, Germany, says that the 3-to-1 likelihood is at a level "you normally wouldn’t bother to mention". By tweaking the parameters describing the dark disk, you could well find completely different results, he says. Nor does the model account for the fact that asteroids, which are not as far out as the Oort cloud, could have caused the craters.

The arbitrary selection of craters and the fact that some estimates of their ages bear large error bars, adds to the uncertainty, says Adrian Melott, an astrophysicist at the University of Kansas in Lawrence. “Dissipative dark matter is a possible explanation, but it’s not clear that it’s explaining anything real,” he says.

Despite its speculative basis, Randall says that the exercise is valuable. “This is trying to turn this somewhat crazy idea into science, by saying we will make predictions based on it,” she says. "We’re not saying we think it’s 100% going to be true."