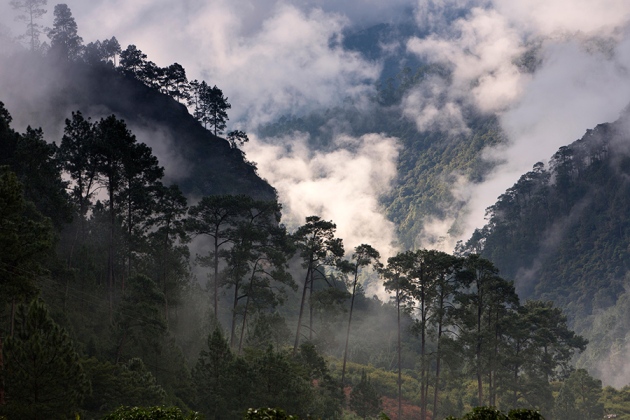 The role of trees in cloud formation has been under-appreciated.

Molecules released by trees can seed clouds, two experiments have revealed. The findings, published on 25 May in Nature1, 2 and Science3, run contrary to an assumption that the pollutant sulphuric acid is required for a certain type of cloud formation — and suggest that climate predictions may have underestimated the role that clouds had in shaping the pre-industrial climate.

If the results of the experiments hold up, predictions of future climate change should take them into account, says Reto Knutti, a climate modeller at the Swiss Federal Institute of Technology (ETH Zurich). For 20 or more years, clouds have been the largest source of uncertainty in understanding how manmade emissions affect the atmosphere, he says.

Davide Castelvecchi talks to the researchers making clouds in the lab

In addition to releasing carbon dioxide, burning fossil fuels indirectly produces sulphuric acid, which is known to seed clouds. So, climate scientists have assumed that since pre-industrial times, there has been a large increase in cloud cover, which is thought to have an overall cooling effect by reflecting sunlight back into space. And they have assumed that this overall cooling effect has partially masked the climate’s underlying sensitivity to rising carbon dioxide levels.

The latest experiments suggest that it may have been cloudier in pre-industrial times than previously thought. If this is so, then the masking effect, and in turn the warming effects of carbon dioxide, might have been overestimated, says Jasper Kirkby, a physicist at the CERN, Europe’s particle-physics laboratory near Geneva, Switzerland, who led one of the experiments.

But Kirkby adds that it is too early to say whether this is true in practice, or by how much, because there are so many factors that play into such projections. “There are many uncertainties; we are only talking about one,” says Kirkby. Knutti says the results will probably not affect the most likely projections of warming, as laid out by the Intergovernmental Panel on Climate Change. “Our best estimate is probably still the same," he says.

Clouds are made of microscopic droplets of liquid water or, in some cases, of small ice crystals. But in the atmosphere, water vapour cannot simply turn into a cloud: it needs solid or liquid particles, known as aerosols, on which to condense.

About half of these aerosols originate, already in solid form, from Earth’s surface: for instance, dust from deserts, salt crystals from the oceans or soot from combustion. The other half forms anew in the atmosphere from gaseous impurities. The individual gas molecules capture more molecules from the air to form solid particles. If they grow to 50–100 nanometres, water vapour can condense on them. 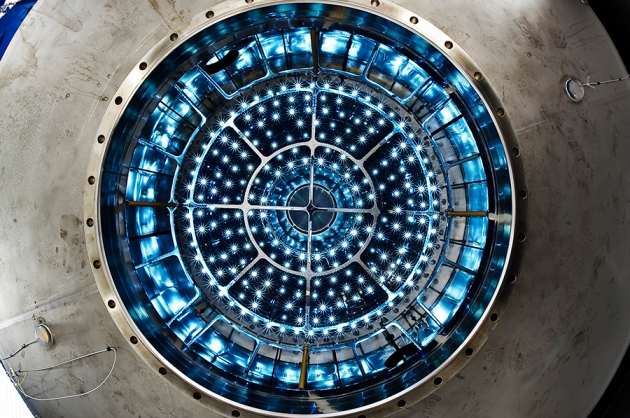 The CLOUD experiment simulates the effects of cosmic rays in the atmosphere.

Until recently, atmospheric scientists thought that only sulphuric acid vapour, which can be produced by volcanic emissions or by burning fossil fuels, could trigger this process. As a result, it was thought that pre-industrial skies were somewhat less cloudy than present ones because they contained less of this pollutant, says Kirkby.

To investigate the process, he turned to the Cosmics Leaving Outdoor Droplets (CLOUD) experiment, which he founded. A three-metre tall stainless steel tank that can reproduce a vast range of atmospheric conditions, CLOUD can be hooked up to the beams of particles that feed the Large Hadron Collider (LHC) at CERN. This simulates the effects of cosmic rays — high-energy subatomic particles that come from outside the Solar System and are thought to have a role in cloud formation — in the atmosphere.

In the two Nature papers1, 2, Kirkby and his co-authors report that aerosols can form and grow to the size needed to seed a cloud from compounds emitted by trees — without any sulphuric acid and accelerated by simulated cosmic rays. In these experiments, the team used α-pinene, a molecule that helps to give fir forests their characteristic smell, but compounds from other types of vegetation might show a similar effect, the scientists say.

In the third paper, published in Science3, a team that includes some of Kirkby’s co-authors reported a similar finding using a different experiment. Federico Bianchi, a chemist now at the University of Helsinki, and his collaborators measured the composition of air and monitored the weather at the Jungfraujoch Research Station in the Swiss Alps at around 3,500 metres in altitude. They found that molecules similar to α-pinene that could also originate from vegetation can seed clouds without much sulphuric acid. 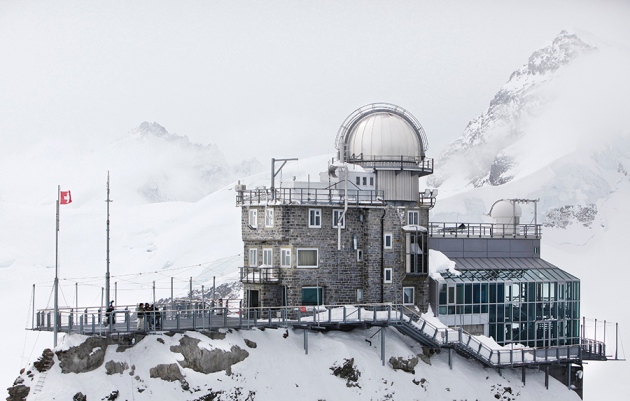 The Jungfraujoch Research Station in the Swiss Alps.

In addition to feeding into climate predictions, the findings have another potential implication, says atmospheric scientist Bjorn Stevens of the Max Planck Institute for Meteorology in Hamburg, Germany. Some scientists have warned that measures such as scrubbing sulphur dioxide from coal-plant emissions could remove some of the beneficial cooling effect of clouds and boost global warming, but this may now be less of a concern because trees can seed clouds too. “What it means is, we don’t have to fear clean air,” says Stevens.

It is also interesting to speculate whether trees emit these compounds in part because there is a benefit to them in making their own climate, Kirkby says. “This really does touch on the Gaia hypothesis,” he says, referring to the theory that Earth’s life behaves as a single organism that tends to preserve itself. “It’s a beautiful mechanism for trees to control their environment.”