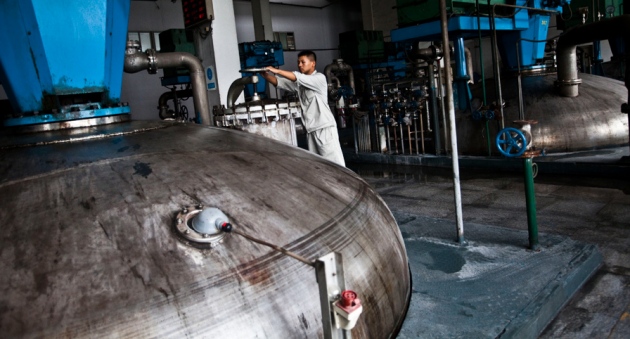 Cathay Industrial Biotech has been embroiled in litigation over the rights to its fermentation process for making dicarboxylic acids.

China’s ambitious efforts to build an ‘innovation economy’ have led to a surge in patents as companies seek to protect their hard-earned intellectual property (IP). From 2008 to 2011, the number of patent applications grew by an average of more than 20% each year; last year China handled 526,412 applications, overtaking the United States for the first time, according to a report issued last week by the World Intellectual Property Organization in Geneva, Switzerland (see ‘Patent boom’).

But that increase has been accompanied by a huge rise in patent litigation — 7,819 cases in 2011, according to China’s Supreme People’s Court, roughly twice as many as in the United States — as companies and researchers stumble through the unfamiliar terrain of IP law. Although one would expect a growing volume of patents to lead to more litigation, notes Elliot Papageorgiou, an IP-enforcement expert at law firm Rouse in Shanghai, Chinese companies are also “learning how to use IP as ‘swords’ against both local competitors as well as foreign companies”. 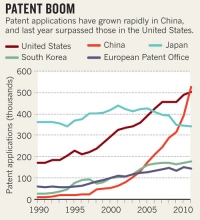 A high-profile case settled last month highlights how companies court trouble by failing to protect their technologies, and how academic scientists can get dragged into the fray. The modest punishment meted out is also raising concerns that China’s courts do not offer enough protection for innovators.

“China is well on the way to having a high-quality IP legal and enforcement structure,” says Ian Harvey, co-director of Tsinghua Business School IP Centre in Beijing. “But some regions are further behind, with people and companies not understanding what IP is, how it is used in business and what they should be doing.”

The recent case involved technology for producing a long-chain organic molecule called dodecanedioic acid (DC12), used to make nylon, lubricants and pharmaceuticals. In the late 1990s, Liu Xiucai, founder and chief executive of Cathay Industrial Biotech in Shanghai, developed a process to mass-produce the acid, winning major international customers such as the chemical company DuPont, based in Wilmington, Delaware. Cathay now produces more than 10,000 tonnes of DC12 per year, accounting for about half of the world’s supply. “Our process solved a problem that DuPont and others could not,” says Liu. Cathay uses fermentation to convert fatty acids into dicarboxylic acids — and was able to scale up the procedure with the help of a particularly efficient strain of bacterium. But Cathay did not patent some key technologies in the process, instead choosing to keep them as trade secrets (an option that is not uncommon for companies around the world).

In 2010, Shandong Hilead Biotechnology in Laiyang announced that it would start producing 10,000 tonnes of dicarboxylic acids a year, with the intention of ramping up to 60,000. Hilead set its prices much lower than the market rate — forcing Cathay to do the same — and started to file patents on crucial parts of the fermentation process.

Liu suspected that Hilead had stolen his process, in part because Wang Zhizhou, a former Cathay employee, had resigned for personal reasons in 2008 and became Hilead’s deputy general manager the following year. So Cathay filed a series of lawsuits to reclaim its intellectual property, embroiling not only various employees of both companies, but also the Chinese Academy of Sciences Institute of Microbiology (IMCAS) in Beijing.

A ruling in the first case has given Cathay a decisive victory. The case was brought by two Cathay employees, Lei Guang and Li Naiqiang, who claimed that a 2010 Hilead patent had “denied their right, under Chinese patent law, to authorship of the processes they developed”. Hilead’s patent bore the names of multiple IMCAS staff members, including director Li Huang, and Hilead employees including Wang.

A July decision of the Beijing Number 1 Intermediate Court, upheld on 16 November by the Higher People’s Court, found that the patent was “plagiarized” from Cathay’s technical methods, and noted that Wang and Ge Minghua, another former Cathay employee who went to work for Hilead, had had access to the details of Cathay’s procedures. Li Huang says that he did not even know that he had been named on the patent, and that IMCAS is taking steps to avoid similar situations in the future. None of the other defendants in the case replied to Nature’s questions about their involvement.

Li Naiqiang says that the decision sets an important precedent for protecting the IP of researchers and companies in China: “If achievements are not protected, it will reduce industry willingness to do research and development and will hinder the development of the high-tech industry.”

Cathay’s victory is unlikely to make a big difference to its bottom line. Although the ruling invalidates Hilead’s patent, preventing the company from using it to shut down Cathay’s process, Hilead does not have to stop its own dicarboxylic acid production (Cathay hopes to achieve that through further legal action). Hilead is, however, required to apologize publicly in Science and Technology Daily, the official newspaper of the Ministry of Science and Technology. “In the Chinese mind, the moral punishment is measured in parallel with economic damages,” says Wei Wei, a patent lawyer in Dallas, Texas, who handles cases related to China.

Zhiwu Chen, an expert on China’s economy at Yale University in New Haven, Connecticut, agrees that the lack of monetary compensation is “pretty typical” in China. He says that this is partly because of the courts’ reluctance to set precedents that could lead to penalties for state-owned enterprises.

But the country will achieve its potential for innovation only if the judicial system changes, Chen argues. If innovators are to feel secure in the country, he says, courts must start to calculate financial damages. “This example shows it doesn’t pay to be an innovator in China.”