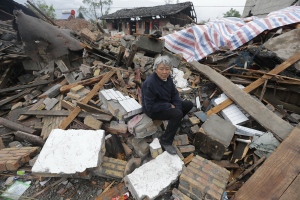 The quake that flattened Longmen village near Ya'an, China, on 20 April could portend to future disasters along nearby faults.

The deadly tremor that shook the city of Ya'an in southwestern China last weekend may hint at where future quakes will strike in the region, researchers say. But they disagree on which seismic fault is likely to rupture next.

At 8:02 a.m. local time on 20 April, an earthquake recorded as magnitude 6.6 by the US Geological Survey struck Ya’an in Sichuan province. According to the latest official figures, the death toll has reached 193, with 12,211 people injured and 25 missing

The Ya’an quake was caused by the failure of the southern segment of the Longmenshan fault. In May 2008, a rupture at the northern end of the same fault caused the devastating magnitude-7.9 Wenchuan earthquake that killed around 80,000 people.

The latest quake “is not surprising”, says Liu Qiyuan, a geophysicist at the China Earthquake Administration’s Institute of Geology in Beijing. In the aftermath of the Wenchuan quake, several research groups, including Liu’s, calculated the stress changes in adjacent faults and found that the biggest stress increase was in the southern Longmenshan fault.

“As the stress has been released by the Ya’an quake, the fault is now safe,” says Liu. He predicts that the Xianshuihe and Anninghe faults — which intersect with the southern end of the Longmenshan fault from the west and east, respectively — now pose the greatest seismic hazards.

Both of those faults are very active and have produced several large earthquakes over the past 200 years. Moreover, the Wenchuan quake and the magnitude-6.9 Yushu quake in 2010 have added considerable stress in faults, says Liu. With a network of about 300 broadband seismometers in the region, “we are monitoring the crust movement very closely,” he says.

However, Mian Liu, a geophysicist at the University of Missouri in Columbia, does not agree. “The kind of stress increase caused by an adjacent fault failure is typically less than a few per cent of the stress that is required to produce a large earthquake,” he says. “It’s not a reliable indicator for seismic hazards.”

By contrast, he adds, analyses of a fault’s seismic moment — a measure of strain energy in the crust that could be used to produce earthquakes — are more useful. “It’s like checking the bank balance by calculating the incomes and the spendings,” Mian Liu says.

The ‘incomes’ depend on how fast the fault moves, which indicates how quickly the strain energy builds up over time. The ‘spendings’ are based on the history of previous ruptures. Such accounting led Mian Liu and his colleagues to predict in 2010 that the southern segment of the Longmenshan fault could rupture and produce quakes of magnitude 7.7 in the next 50 years1. In the event, it took only 3 years. “It seems that nature is in a hurry,” he says.

“This doesn’t mean that the Longmenshan fault is now safe,” says Mian Liu. Based on seismic measurements, he notes that last week's quake in Ya'an didn’t rupture the entire southern segment, but instead released only one-third of its accumulated energy. “The 60-kilometre intact stretch between the Ya’an and Wenchuan quakes is likely to rupture in the next few decades,” he says. “It’s still able to cause earthquakes of magnitude 6 to 7.”

By comparison, Mian Liu thinks that the Xianshuihe and Anninghe faults are less risky because, although the crust movement has generated a lot of strain energy, they have ‘spent’ a lot in the past, he says.