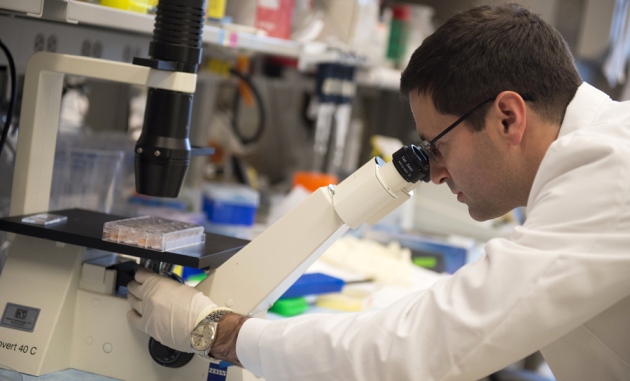 Some institutions have already begun to sequence both normal and tumour tissue of cancer patients.

Many cancer patients in clinics across the United States might be getting inaccurate information from DNA analyses that are intended to match them with the most effective therapy.

The finding, published in Science Translational Medicine1 on 15 April, comes as companies are increasingly focused on churning out drugs that target specific cancer-causing mutations. Demand for tumour sequencing has soared as physicians try to find the treatment best suited to combat a patient’s particular set of tumour mutations.

But many clinics sequence only the tumour DNA and do not compare those sequences to DNA taken from a patient's normal tissue. Omitting that crucial control erodes precision in gauging which mutations are important for treating a particular cancer, says Victor Velculescu, a cancer biologist at Johns Hopkins University in Baltimore, Maryland, and lead author of the study.

It can also confound clinical-trial results when investigators try to match treatment response to genetic profiles.

“There is a rush to do this clinically and apply it to patient treatment without thinking about what the best control is,” says Velculescu. “You could use that information to place patients on inappropriate therapy.”

Velculescu says such considerations are particularly important as US lawmakers weigh up President Barack Obama's call for a US$215-million Precision Medicine Initiative that aims to enrol one million people in a study to combine genomic and health data.

“The reality is you can’t have precision medicine without having precision genomics,” says Velculescu. “And you can't expect to put patients on the right therapy if you can’t correctly analyse the tumour. It’s just not going to work.”

Velculescu and his colleagues profiled tumour and normal DNA from 815 people with advanced cancers. The team tested two common methods of analysing tumour DNA: sequencing all protein-coding genes in a sample, or sequencing a smaller set of 111 genes believed to be associated with cancer.

Of the samples for which all protein-coding genes were sequenced, about two-thirds of the mutations found were false positives, meaning that they were also found in the normal cells and were thus unlikely to be useful therapeutic targets. The same phenomenon was found in about one-third of the mutations uncovered by targeting the set of 111 genes.

Some institutions have already begun to sequence both normal and tumour tissue of cancer patients. Michael Berger, a cancer researcher at Memorial Sloan Kettering Cancer Center in New York, says that a programme there has so far analysed DNA from the tumours and normal tissue of more than 4,000 patients, focusing on a set of 400 genes.

But Berger adds that the extra sequencing poses a significant burden: the procedure costs more money, and requires more patient education. Because mutations in normal tissue may also be found in reproductive cells, and thus can be passed on to children, patients need to consider the implications for family members and must sign a separate consent form.

It has been worth the added effort for the quality and richness of the data, says Berger. But he understands that other labs — particularly those that are new to cancer sequencing — may not be ready to embrace the added burden. “Sequencing unmatched tumours is better than not sequencing at all.”