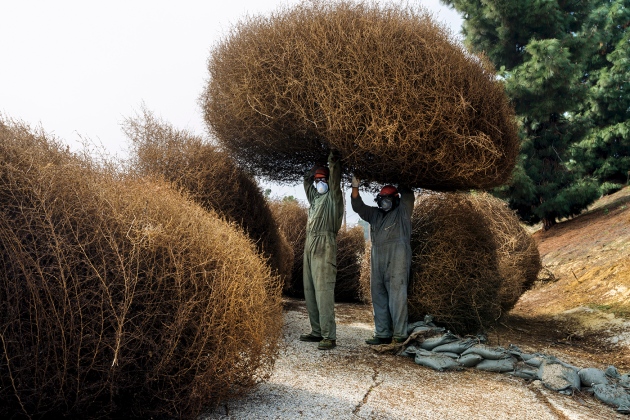 Drought in California has been exacerbated by climate change and is projected to get worse.

California has a history of going it alone to protect the environment. Now, as US President Donald Trump pulls back on climate science and policy, scientists in the Golden State are sketching plans for a home-grown climate-research institute — to the tune of hundreds of millions of dollars per year.

The initiative, which is backed by California’s flagship universities, is in the early stages of development. If it succeeds, it will represent one of the largest US investments in climate research in years. The nascent ‘California Climate Science and Solutions Institute’ would fund basic- and applied-research projects designed to help the state to grapple with the hard realities of global warming.

The project could be funded by revenue from the state’s cap-and-trade programme to reduce greenhouse-gas emissions, but its political prospects are unclear. Advocates say they have received a warm reception from California Governor Jerry Brown, but a spokesperson for Brown would say only that “discussions are ongoing”. The proposal must also clear the state legislature.

“The goal is to develop the research we need, and then put climate solutions into practice,” says Daniel Kammen, an energy researcher at the University of California, Berkeley. Although the institute would focus on science to serve California, Kammen says Brown and other state leaders recognize that their work will have global impact — particularly now that Trump has promised to pull the United States out of the 2015 Paris climate accord. “The term we often use is ‘rule from below,’” Kammen says.

And California might ultimately have some company. At Columbia University in New York City, science dean Peter de Menocal — a palaeoclimatologist — hopes to build an alliance of major universities and philanthropists to support research into pressing questions about the impacts of climate change. Potential topics include local variations in sea-level rise and the changing availability of freshwater resources and food.

De Menocal has already tested the idea on a smaller scale. Last year, he launched the Center for Climate and Life at Columbia, enlisting corporate philanthropists to fund the university’s Earth scientists. The project has raised about US$8 million. “This problem is bigger than any one institution,” says de Menocal. “What private philanthropy can do that the federal government doesn’t do is target assets to solve specific problems.”

Writ large, that is what academics in California hope to do. The proposed climate institute there has drawn support from nearly all the state’s major academic institutions, including all ten University of California campuses and private powerhouses such as Stanford University and the California Institute of Technology in Pasadena. Scientists from any institution would be eligible for grants to study topics ranging from ocean acidification to tax policy, Kammen says; priority would go to projects and experiments that engage communities, businesses and policymakers.

“The goal is to develop the research we need, and then put climate solutions into practice.”

It would not be the first time that California has stepped up to support an area of science that has fallen out of favour in Washington DC. In 2004, the state’s voters approved $3 billion to create the California Institute for Regenerative Medicine in Oakland, after then-President George W. Bush restricted federal support for research on human embryonic stem cells; that centre has since funded more than 750 projects. The proposal for a new climate institute began similarly, as a reaction to White House policies, but its organizers say that the concept has evolved into a reflective exercise about academics’ responsibility to help create a better future.

“It almost became an inventory or indictment of ourselves,” says Benjamin Houlton, director of the John Muir Institute of the Environment at the University of California, Davis, and chair of the committee that is developing the institute proposal. “We realized we weren’t doing enough.”

Panel members aim to bring a complete plan to the California legislature this year, in the hope of persuading lawmakers to fund the effort. Kammen says that the institute’s backers would like to have the institute up and running by September 2018, when Brown is set to host a global climate summit in San Francisco, California.

But the California initiative still faces significant challenges. Severin Borenstein, an economist at the University of California, Berkeley, warns that academics will face plenty of competition for a limited pool of cap-and-trade revenue. He also notes that efforts to create such interdisciplinary climate institutes have struggled in the past, largely because it’s hard to rally academics from disparate fields around a common goal. Nonetheless, Borenstein favours the climate initiative, because he sees global warming as an issue on which California can have a truly global impact.

“The main way California can contribute to dealing with climate change is through innovation,” he says. “We can invent and test the technologies and processes that will allow the rest of the world to reduce their greenhouse-gas emissions.”