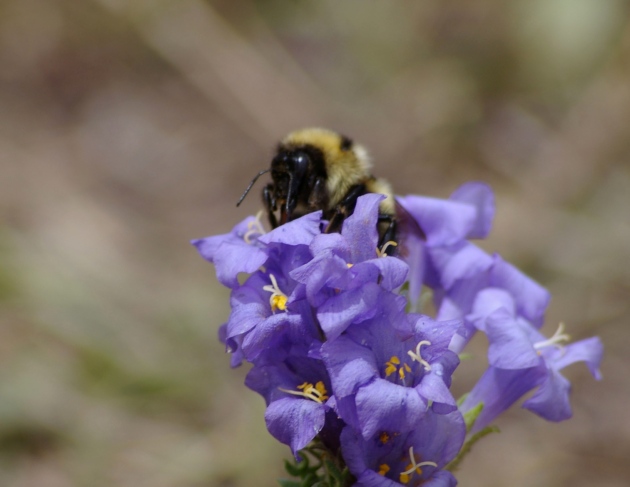 Bees use their tongues to retrieve nectar from flowering plants.

The growing list of the ways in which climate change is reshaping life on Earth has an unusual new addition: shorter bee tongues.

Over the past 40 years, warmer, drier weather has reduced flower populations in some regions of the Rocky Mountains in North America, forcing bees to work harder to find nectar. At the same time, bee tongues in those regions have got shorter, according to a study published in Science[1].

The change to the bees’ anatomy probably arose because longer-tongued bees tend to be picky eaters, dining mainly on nectar from deep flowers, says lead author Nicole Miller-Struttmann, an evolutionary ecologist at SUNY College at Old Westbury in New York. And when food becomes scarce, it doesn’t pay to be picky.

“It would take longer to find the deep flowers, so the longer-tongued bees are going to spend more time searching,” she says. “But if you’re a generalist, short-tongued bee, you’re more likely to run into your resource.”

More than 85% of flowering plants — including some crops — require pollinators to reproduce. Declines in bee pollination can reshape landscapes and threaten fruit harvests, and the impact of climate change on bee populations has been a cause for great concern.

Miller-Struttmann and her colleagues decided to study bee populations at three alpine sites in the Rocky Mountains. Alpine habitats around the world have experienced a recent drop in the number of flowers, in response to warmer temperatures and dryer soils. On Pennsylvania Mountain, home of one of the research sites, flower production has declined by 60% since the 1970s.

The researchers measured the tongue length of 170 bees, using tiny calipers capable of capturing the roughly three-millimetre difference between short- and long-tongued pollinators. Under the microscope, a bee’s tongue looks like a mop and functions like a straw, having a tubular handle and hair-like projections splayed at the end. Bees unfurl their mop-tongue into a flower and slurp up the nectar from the blossom’s depths.

A comparison of freshly collected bees with those gathered and archived up to 40 years ago showed that, on average, tongues have got shorter in the two dominant bee species in that area, Bombus balteatus and Bombus sylvicola.

The team then set about determining what could have caused the shift. The scientists developed a series of possible explanations — such as changes in bee body size, or in the proportion of long-tubed versus short-tubed flowers, among others — and tested each one. The most likely cause, they found, was an overall decline in flower populations.

“If you have a short tongue, you may not be able to get all the nectar, but you can collect from different kinds of flowers,” says Miller-Struttmann. “You’re not, at the colony level, wasting energy growing a long tongue.”

Nathan Muchhala, an evolutionary ecologist at the University of Missouri in St Louis who studies pollination by bats in tropical regions, says that the results are remarkable because they show extremely rapid evolution. “If they documented such short-term extensive changes in the United States, who knows what’s going on in less-well-studied habitats,” he says.

A mismatch between pollinators and their food plants could have negative consequences for plant populations, says Miller-Struttmann. But she adds that there is a positive way to view the bee results: “On the brighter side, our study suggests that these bumblebees are able to adapt to their changing environment, provided they have enough time and variation in their traits to do so.”