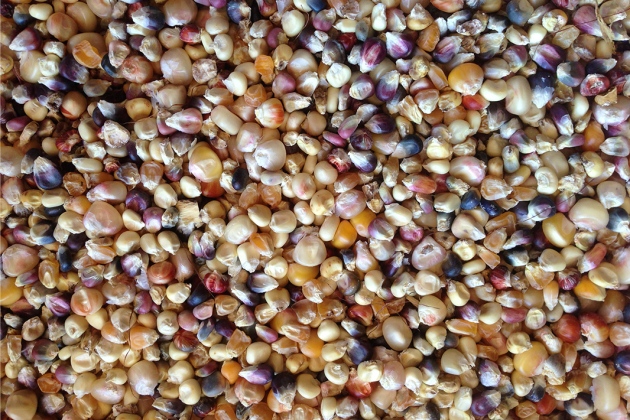 Maize spread from Mexico into the lowlands of the United States around 4,000 years ago.

Genome sequences from nearly 2,000-year-old cobs of maize (corn) found in a Utah cave paint a portrait of the crop at the dawn of its adaptation to the highlands of the US southwest. That maize, researchers found, was small, bushy and — crucially — had developed the genetic traits it needed to survive the short growing seasons of high altitudes.

The team’s study1, published on 3 August in Science, is remarkable in how it tackles complex genetic traits governed by the interactions of many different genes, say researchers. It uses that information to create a detailed snapshot of a crop in the middle of domestication. Such insights could help modern plant breeders to buffer crops against global climate change.

Geneticists of both modern and ancient crops have poured tremendous effort into understanding maize, which was one of the most important subsistence crops in the New World thousands of years ago, and is a cornerstone of global agriculture today.

Maize originated in Mexico and rapidly spread into the lowlands of the southwest United States about 4,000 years ago. But communities at higher altitudes did not fully embrace the crop until 2,000 years later — a delay that has long puzzled archaeologists studying the region, says Kelly Swarts, a quantitative geneticist at the Max Planck Institute for Developmental Biology in Tübingen, Germany. “There was always the question: why wasn’t this catching on? Why weren’t people doing agriculture in the uplands?” she says.

Swarts and her colleagues turned to a site in a Utah cave called Turkey Pen Shelter, where a farming community lived about 2,000 years ago. Inhabitants of the cave raised turkeys, wove intricate baskets and shoes, and had the resources needed to store and process corn. Maize, which they probably served in soups and stews, comprised about 80% of their diet.

Swarts’s team sequenced the genomes of fifteen 1,900-year-old maize cobs found in the shelter and compared their sequences to those in a database of genomes and physical traits from some 2,600 modern maize lines. The researchers then used that information to extrapolate the physical characteristics of the Turkey Pen maize plants, including complex traits such as flowering time. The analysis revealed a crop that was shorter and more branched than modern varieties. “More like little bushes,” says Swarts, though the role of these traits is unclear. The crop also flowered more quickly than lowland varieties — an important adaptation to life in the highlands, which have a shorter growing season than lower elevations.

The analysis could open the way for similar studies of complex traits in other plants and animals, including humans, says Matthew Hufford, who studies evolutionary genomics in maize at Iowa State University in Ames. “We just now have the genetic tools and the analytic tools to make really good use of them.”

Plant evolutionary biologist Robin Allaby of the University of Warwick, UK looks forward to seeing the same approach applied to earlier stages of maize domestication. "That stuff was 1,900 years old, and a lot of the whistles and bangs had already happened," he says. "It's going to be really cool to see what a full 5,000-year-old maize phenotype looks like."

A key finding from the study, says Hufford, was the realization that the genetic variants needed to adapt to highland life were already circulating in maize populations thousands of years ago “The diversity needed for high altitudes was there, but getting it in the right combination took 2,000 years,” he says.

And that diversity could be crucial for breeders as they try to adapt modern maize to a rapidly changing climate, says Swarts. “It’s really promising for maize’s future that it has so much standing variation — assuming we can conserve that diversity,” says Swarts. “If we needed to do this, it wouldn’t take 2,000 years. We could do it a lot faster now.”

The picture caption originally misstated the date of domestication for maize.