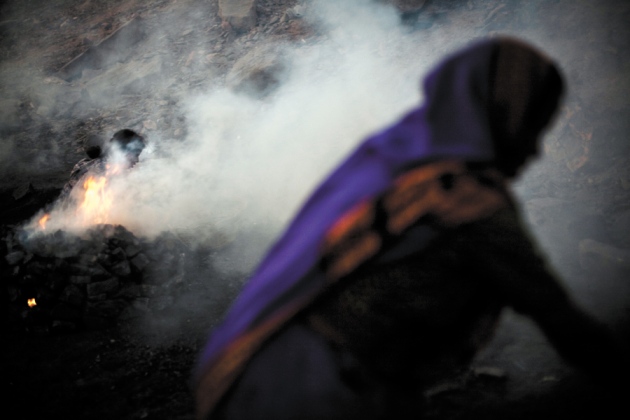 A woman in Jharkhand, India, burns raw coal into charcoal, which emits toxic gases that harm her health and affect the climate.

In December, the world's attention will fall on climate-change negotiations at the 20th United Nations Framework Convention on Climate Change (UNFCCC) Conference of the Parties in Lima, Peru. The emphasis will be on reducing emissions of long-term atmospheric drivers such as carbon dioxide, the effects of which will be felt for centuries. At the same time, the mitigation of short-lived climate-forcing pollutants (SLCPs) such as methane, black carbon and ozone — which are active for days or decades — must be addressed (see 'Compounds of concern').

SLCPs cause poor air quality and are responsible for respiratory and cardiovascular diseases. Particulate matter in the atmosphere is the leading environmental cause of ill health, and air pollution is causing about 7 million premature deaths annually1. Interactions between warming, air pollution and the urban heat-island effect (which causes cities to be markedly warmer than their surrounding rural areas) will raise health burdens for cities worldwide by mid-century2. Air pollution also damages ecosystems and agriculture.

Current air-quality legislation falls short. Existing measures would prevent just 2 million premature deaths by 2040. We estimate that around 40 million more such deaths would be avoided if concentrations of methane, black carbon and other air pollutants were halved worldwide by 2030 (see 'Clean air').

This is not an 'either-or' decision: coordinated action on both climate change and air pollution is necessary. And it is tractable: for example, electric-car sharing or shifting from fossil fuels to renewable power generation would reduce consumption and overall emissions and lead to behavioural shifts that are beneficial in both the near and long term3.

But defining joint CO2 and SLCP reduction goals is difficult. Researchers need to spell out the benefits and trade-offs of separate and joint air-pollution and climate-change mitigation in terms of public health, ecosystem protection, climate change and costs. A suite of mitigation policies must be designed and applied on all scales — from cities to the global arena.

Studies4, 5 estimate that rigorous reductions of global methane and black-carbon-related emissions by 2030 could prevent around 2.4 million premature deaths per year that result from air pollution, and save 50 million tonnes of crops through avoided ozone damage (methane is a precursor for ozone production). Global mean temperature rise would be slowed by about 0.5 °C by mid-century. The rate of sea-level rise would be reduced by 20% in the first half of this century by such measures alone, and by 50% in the second half if CO2 and SLCP mitigation are combined6. 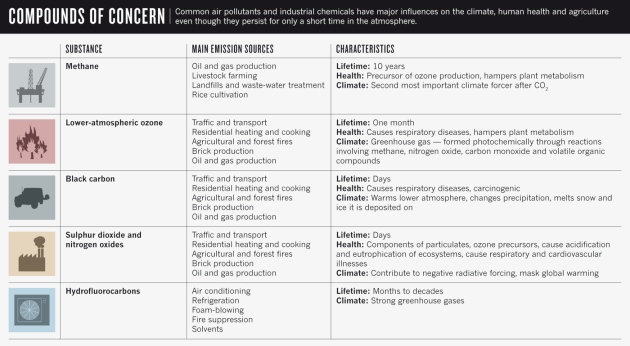 Lower air pollution also has societal benefits. Methane captured from landfills or manure can be used to run residential stoves, for example. In developing countries, replacing conventional cooking stoves with clean-burning technologies allows people — women and children, in particular — to invest time in education or financially rewarding work, rather than spending time collecting wood or other materials for basic family needs7.

All SLCPs must be reduced in concert. Sulphate aerosols cool the climate, as happens following volcanic eruptions. But delaying sulphur dioxide mitigation as a way to temporarily mask global warming is problematic. Greater stresses on people's health and the environment already result from today's enhanced particulate concentrations and acidified rain.

Anthropogenic emissions of methane are predicted to increase by about 25% (more than 70 million tonnes annually) by 20304, yet the gas is hardly regulated. Methane is covered by the Kyoto Protocol, but most countries' controls focus on CO2. In the European Union (EU), for example, methane is not covered by the national emissions ceiling directive, the directive on ambient air quality or the EU Emissions Trading System. The EU's industrial emissions directive omits major sources of the gas, such as cattle farming.

Air-quality policies in the EU and the United States have been partially successful in reducing periods of extreme ozone concentration. But average regional concentrations have not declined in the past two decades across Europe, and there is still no legally binding limit, only a target. Trends in the United States are mixed and vary seasonally; in east Asia, surface ozone is increasing.

For black carbon, there are almost no regulatory obligations to report emissions or measure ambient concentrations. Few regional and local assessments have been made. Little change in global black carbon emissions is predicted by 2030, because reductions in North America, Europe and northeast and southeast Asia and the Pacific will be offset by increases in south, west and central Asia and in Africa4.

Unlinked and narrow air pollution and climate-policy interventions can have mixed results on both fronts. In the EU, for example, legislated vehicle-emissions limits have reduced particulate concentrations by 45% between 1995 and 2008 and are projected to reduce black carbon by more than 90% by 2025 compared with 2000. Yet CO2 emissions from the ever-growing transport sector are rising. And air quality is not under control. Unregulated residential emissions from biomass heating are rising, and will account for 80% of black-carbon emissions in Europe in 2025.

Also problematic are lax targets. For example, the annual EU limit for particulate matter smaller than 2.5 micrometres (PM2.5) that will be binding by 2015 is 2.5 times higher than that recommended by the World Health Organization (WHO). And the current PM10 (particulates smaller than 10 micrometres) limit is twice that recommended by the WHO. If the EU meets its limit on PM10, no further action to meet the legal requirements will be needed, because the PM2.5 value will also be met.

Some coordinated efforts to reduce air pollution and slow climate change have begun. The Climate and Clean Air Coalition to Reduce Short-Lived Climate Pollutants (CCAC), formed in 2012, now includes 42 nations, the European Commission and more than 50 organizations. It focuses on mitigating methane and black-carbon emissions for transport, brick, oil and natural-gas production, household cooking and heating. Since 2009, the Arctic Council runs task forces to reduce black-carbon and methane emissions to slow climate change in the region, and has produced two reports in addition to a scientific assessment of black carbon in the Arctic. But so far, only Norway has developed a national action plan to reduce SLCPs.

None of these efforts addresses structural and behavioural changes. Coordinated action to reduce SLCPs and CO2 simultaneously is not an objective, because it is assumed that parallel reductions will happen under different policy umbrellas.

Effective mitigation of SLCPs will require detailed assessments of the multiple impacts of emitted air pollutants together with CO2, their sources, their atmospheric interactions and their potential for mitigation8.

Combined efforts at the city and state level will be particularly important because this is where most people are exposed to air pollution, and 75% of global CO2 emissions is generated in cities. Positions and task forces should be created to promote joint emissions-reduction strategies across municipal and regional departments. For example, climate policies that encourage combined heat and power plants with low power capacities for cities — thus potentially exempting them from air-quality regulations3 — should be avoided.

Scaling up and coordinating local efforts and national strategies are necessary. For example, local efforts in the Arctic can be only partly effective because the region is subject to imported pollution from the residential and transport sectors of countries at lower latitudes.

“Unlinked and narrow air pollution and climate-policy interventions can have mixed results on both fronts.”

Global organizations such as the CCAC, the World Meteorological Organization and the WHO could assume coordinating roles. Arctic Council member states should take a leadership role in national actions to reduce black carbon and methane at their next ministerial meeting in 2015. The European Commission should propose ambitious emissions limits for methane to the national emissions ceiling directive.

It is important that steps to limit SLCPs do not distract from CO2 mitigation, and vice versa. We calculate, building on work5 by D.S. and colleagues, that a delay of 20 years in reducing CO2 emissions would result in 0.4 °C more warming by the end of the century than if measures were put in place immediately, with the result that the 2 °C temperature mark would be crossed in the mid-2060s rather than just after 2100 (see 'Clean air').

The 2015 Conference of the Parties meeting in Paris needs to pursue its primary mission to reduce CO2 for the climate's sake. That said, the scientific community must speak out against recommendations — explicit or implicit9, 10 — to exclude SLCPs from discussions of climate-change mitigation or to delay their reduction. Tens of millions of lives are at stake, along with damage to agriculture, ecosystems and cultural heritage.