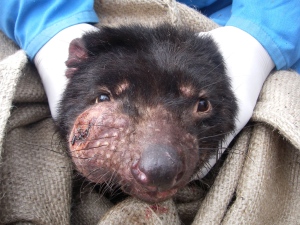 Tasmanian devils are dying of a contagious cancer called devil facial tumour disease, which spreads between animals when they tussle over food. Now, a team of scientists has discovered how the disease infects new hosts by sneaking past the devil's immune system. The work could help in developing a vaccine that might prevent healthy devils from catching the cancer.

“It’s probably the most promising lead we’ve had for a vaccine since the initial characterization of the disease,” says immunogeneticist Hannah Siddle of the University of Cambridge, UK, who is first author of the report, published online in the Proceedings of the National Academy of Sciences1.

Devil facial tumour disease emerged in 1996 and has slashed the Tasmanian devil population by 60%. If left unchecked, it could drive the species to extinction in 20–30 years.

Researchers had assumed that the disease spread easily between animals because of the devil's low genetic diversity, particularly in the genes of the major histocompatibility complex (MHC), which produce proteins that sit on the surface of cells and help the immune system to detect threats such as viruses or tumours. Once the disease emerged in one devil, presumably dodging its immune system by producing these proteins, it was thought that it would be able to fool the immune defences of the whole population.

But rather than producing the same MHC molecules found across all devils, Siddle and her colleagues found that the cancerous cells do not produce MHC molecules at all. “That was a big surprise,” she says.

More surprising still was that the MHC genes in tumour cells had not been disabled by mutations. Instead, the genes responsible for the production of three proteins — β2-microglobulin, TAP1 and TAP2 — had been largely switched off. These proteins are necessary for transporting MHC to a cell’s membrane.

Siddle even managed to reverse this problem using interferon-γ — a molecule that is known to encourage the production of MHC proteins. “The fact that it worked was wonderful and made perfect sense,” says Jim Kaufman, who was lead investigator on the study.

Devil in the detail

A second contagious cancer known as canine transmissible venereal tumour has been infecting dogs for millennia, and also evades the immune system by reducing the expression of MHC proteins on tumour cells. “In that sense, the new results are expected,” says Robin Weiss, a virologist at University College London who studies the canine disease. “But they are a confirmation of the same phenomenon in the Tasmanian devil.”

Unlike the devil disease, this form of canine cancer is rarely fatal. This is partly because the tumour cells eventually produce MHC as they grow in a new host, drawing the immune system’s attention. It is unclear if devil facial tumour disease will also evolve to be less aggressive with time, but with the Tasmanian devil facing extinction, Kaufman is not waiting to find out. He and his team are now working with Australian colleagues to develop a vaccine.

Their plan is to prime healthy devils by giving them cancerous cells that already bear MHC proteins. Their immune systems should then recognize either tiny amounts of MHC on the surface of a cancer cell, or other proteins released as the tumours grow. “We’d start enough of an immune response to tip the balance in favour of the devil,” says Kaufman. “We’ve got some way to go, but we feel quite hopeful that we’ll come up with something.”

Although the priority is to save the Tasmanian devil from extinction, Kaufman also thinks that such research is important should a contagious cancer ever evolve to spread between humans. “Every once in a while, a new disease comes out of nowhere,” he says. “It’s useful to know what might hit people or other animals in the future.”