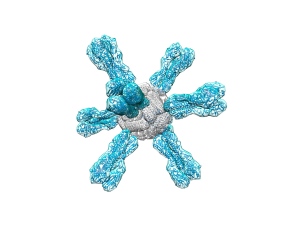 Eight spikes made of viral protein in this synthetic nanoparticle cause the immune system to produce antibodies for a broader spectrum of flu strains than do the common seasonal shots.

Under the microscope, they look like simple jacks, with eight spikes jutting out of a central ball. But these protein nanoparticles are science's latest weapon against influenza: a new breed of flu vaccine that provides better and broader protection than commercially available ones — at least in animal tests.

Current flu vaccines use inactivated whole viruses and must be regularly remade to target the strains most likely to cause illness in the coming year. But the new nanoparticles would require fewer updates because they induce the production of antibodies that neutralize a wider range of flu strains. They could even protect against varieties of flu that have not yet emerged.

“This is taking us on the road to a universal vaccine,” says Gary Nabel, now at the biotechnology firm Sanofi in Cambridge, Massachussetts, who led the work in his former lab at the National Institute of Allergy and Infectious Diseases in Bethesda, Maryland. The results are published on Nature's website today1.

The self-assembling nanoparticles can be made in the lab without having to grow real viruses in eggs or cell cultures, a time-consuming step of commercial vaccine preparation. “In theory, a new version could be produced quickly once a new pandemic virus had been identified, or a new seasonal variant started to circulate,” says Sarah Gilbert, a vaccine researcher at the University of Oxford, UK, who was not involved in the work.

Team member Masaru Kanekiyo created the nanoparticles using haemagglutinin (HA), one of the major antigenic proteins in a flu virus’s coat, and ferritin, an iron-transporting protein that naturally forms spherical clusters. He fused these two proteins in such a way that the HA–ferritin complexes automatically assembled into a structure with a 24-piece ferritin core from which protruded eight three-piece HA spikes, mimicking the natural HA spikes in the flu virus coat. “We created an entirely new molecule that hasn’t been made before,” says Nabel. “What’s cool is that the whole thing self-assembles.”

When injected, the nanoparticles induced levels of anti-flu antibodies 34 times higher in mice and 10 times higher in ferrets compared with a traditional vaccine. Nabel thinks that this is because the HA molecules are much less densely packed on the nanoparticles than those on a real virus, and are not hidden by other coat proteins. “The immune system gets a better look at them,” he says.

Although Kanekiyo built his first nanoparticles using HA from a 1999 strain of H1N1 flu, they also protected ferrets against many other H1N1 strains. These included one from 2007 that had not yet evolved when the 1999 strain was circulating, suggesting that the vaccines might protect against future strains of flu. However, Gilbert points out that it would still be necessary to have a vaccine for each of the types from H1 to H17.

The antibodies induced by the nanoparticles provide such broad protection because they latch onto sites in HA that are common to different flu strains — one on the head of the protein that recognizes host cells, and another on the stem that helps the virus to penetrate cells. “Putting pressure on different parts of the virus is a good thing,” says Nabel. “That’s something you don’t see with the traditional vaccine.”

The researchers now need to test their nanoparticles in humans and develop cost-effective ways of manufacturing them. They are also trying to develop vaccines against HIV and herpesvirues using the same approach — again mounting proteins onto ferritin shells. Nabel hopes that the technique will also work to make vaccines against bacterial and parasitic diseases.